LG at the exhibition CES 2022 has announced an updated line of its TVs, which will go on sale in 2022. 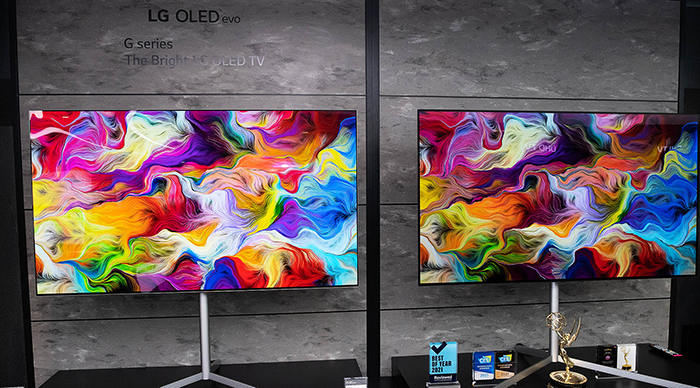 However, the price and the exact release date of the new TVs will be announced in the spring. The company said that it has expanded its range of TVs with several models of new diagonal screen sizes. Also, the manufacturer has increased the brightness of the panels in G-series models. In addition, the company also expanded the list of features of webOS. 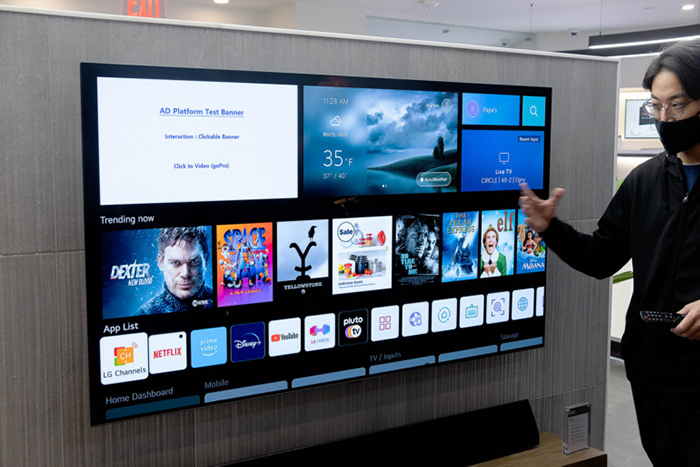 The new range of LG TV will go on sale with a fresh version of the platform webOS 22. Recall that the current version has the number 6.0. Thus, the manufacturer is going to harmonize the version number of the software platform with the year of its release. Also with the release of the fresh version of webOS it will be possible to add multiple accounts. In this case, each of the accounts will receive personal settings, as well as recommendations. Users will be able to switch between the accounts via an interface, or by using a function called NFC Magic Tap.

Also webOS 22 will support a feature called Always Ready. With its help it will be possible to play music, display the current time or various images, when the TV is off. The company also plans to add a collaborative viewing feature. With its help, it will be possible to send streaming video from one TV to another, which is in another room. Also, users of LG TVs will be able to use them to interact with devices of smart home systems that support the Matter standard.

In 2021, LG introduced OLED Evo TVs, which are characterized by higher brightness. Now the Evo matrices will be used not only in the G2 lineup, but also in the more mainstream C2 lineup. The company said that the G2 models will provide a higher maximum brightness rating. This was made possible by a combination of special algorithms to improve brightness, as well as better heat dissipation. In turn, the C2s with the new matrix are expected to outperform the CX TVs.

Both the G2 and C2 will feature a new composite material. Thanks to its application, the TVs will be much lighter. For example, the 65″ C2 is actually half the weight of the C1. This should make unpacking, as well as installing these thin screens much easier. 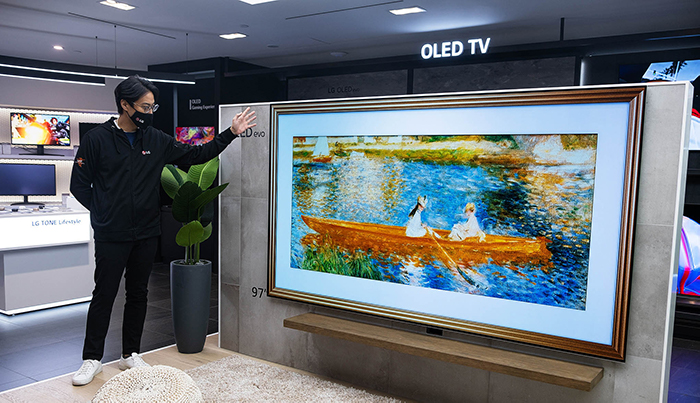 LG has also expanded its OLED TV range with several new panel size options. The G and C lineup will be available in 42- as well as 97-inch TVs. It is also worth adding that all new LG TVs will get the 5th generation of A9 processors. These chips will provide better smart upscaling to 4K, as well as improved Tone Mapping. Other features include HDMI 2.1 interface, as well as support for 120 Hz refresh rate in 4K. They will also support VRR and ALLM. 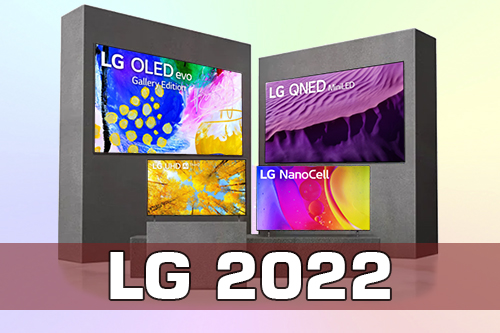 LG’s 2021 TV lineup contained some outstanding models, with the OLED C1 being the most popular for many. LG has improved panel technology, resulting in QNED TVs based on mini-LEDs, as well as OLED Evo screens in the G1 lineup. This could potentially turn into some interesting developments in 2022.

In a piece about LG 2022 TVs, we’ll give you the latest offerings and prices of available models. This will be a good informational boost before you start shopping for a new TV. Let’s take a look at new OLED models, QNED TVs with Mini LED backlighting, the much “slimmed down” NanoCell line, and traditional 4K LCD TVs.

Beginning in the second quarter of 2022, LG Display will integrate its revolutionary OLED.EX technology into every OLED TV it produces, but under the former OLED Evo name. The next-generation OLED.EX display uses LG Display Deuterium technology and the personalized EX Technology algorithm. Compared to conventional OLED displays, brightness is increased by 30%. 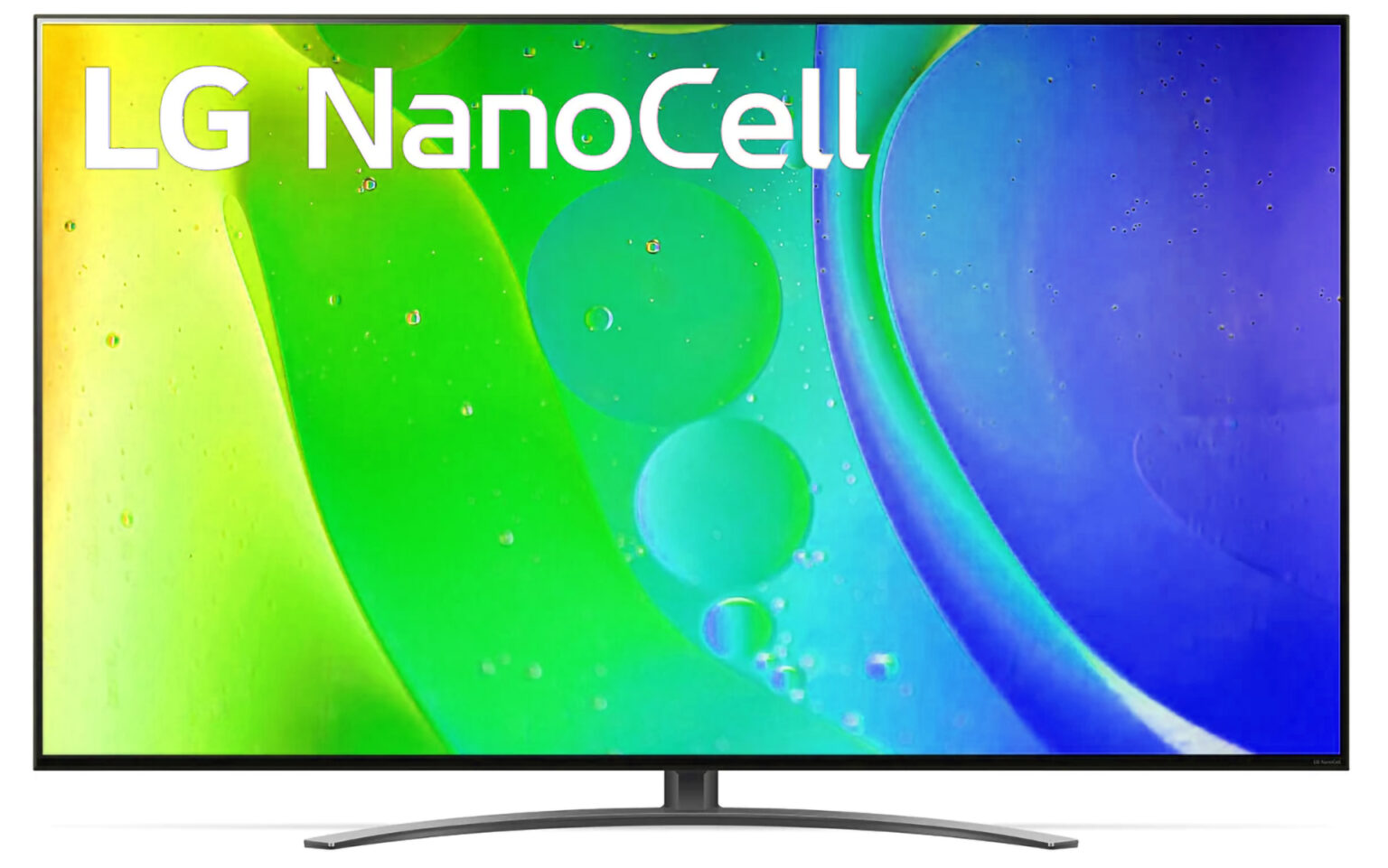 LG’s 2022 TVs already use the fifth generation of Alpha processors with artificial intelligence. LG’s flagship OLED TV models are based on version 9 of the α9 chip. What does this generation bring to the content processing algorithms? Firstly, the dynamic display of tones becomes more accurate due to an order of magnitude increase in the number of graded shades. Second, AI Sound Pro audio processing technology expands the virtual up-mix capabilities of the two channels, bringing it up to the 7.1.2 level.

According to the manufacturer, all LG 2022 TV models will use the webOS 22 operating system. That is, iterations of user interfaces will no longer be numbered, but linked to the year of release. Of the interesting innovations in it we can note the presence of family profiles (settings). And they can be changed by touching a personal smartphone with an NFC-compatible remote.

This is the area that has undergone the least changes. But the range of diagonals to choose from has expanded, with the C2 lineup adding a 42-inch model for the first time, and the G2 lineup adding a 97-inch model. And in the same series managed to achieve weight reduction due to the use of composite fibers in the body instead of metal coating. The frames became thinner. So, let’s proceed to the description of all the series of LG 2022 TVs of the model year. 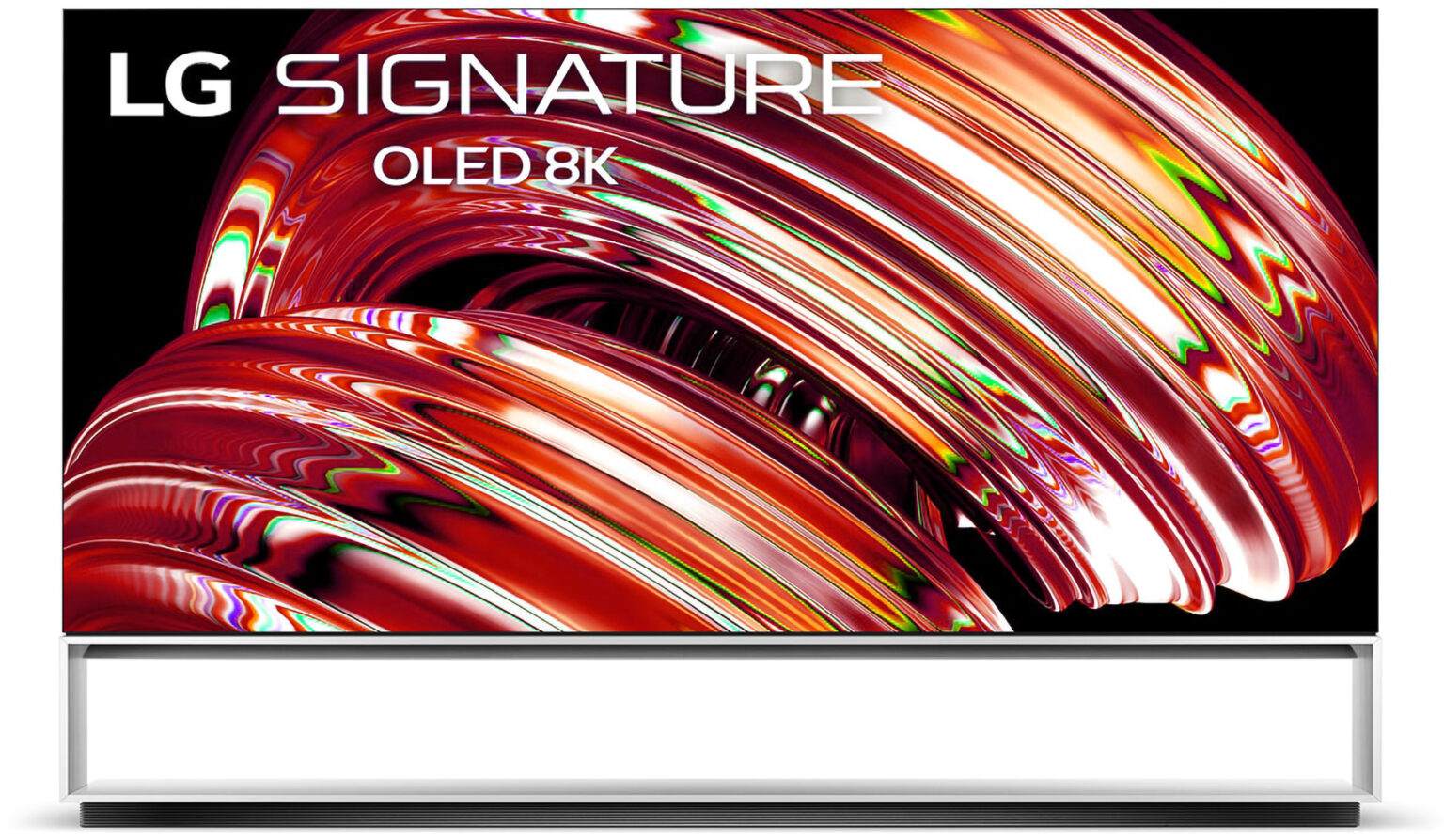 LG is still releasing a pair of 8K resolution OLED TVs in 2022. These belong to the so-called ultra-large TVs and come in two diagonals, 88 inches and 77 inches, with the 88-inch version now able to be wall-mounted. But that’s a moot point, because with the Z2 8K’s fabulous price, it’s very difficult to find a buyer for it.

According to LG, the G2 series uses an advanced OLED panel, which together with Brightness Booster Max provides the highest performance. The brightness of this OLED Evo panel is 30% higher than traditional OLED WRGB panels. The 83″ and 97″ models have been added to the series.

The LG C2 OLED with evo panel is a notch below the G2. A brand new 42″ size with a standard panel has been added to the series. It is the smallest OLED TV ever made. It certainly draws attention as a contender for best gaming TV. The only thing that leaves much to be desired is its price. Although most LG TVs cost the same as last year’s.

mediate between the LG C1 and LG C2. That is, the new Alpha 9 Gen 5 processor and webOS 22 outputs the image on a regular, not Evo, panel. Thus, it turns out that the LG OLED CS9 is superior to the C1, but ranks below the C2. This is reflected in the pricing, but the series will not be available in most markets.

Compared to the C2, the LG B2 OLED TV eschews the evo and uses the Alpha 7 Gen 5 processor instead of the Alpha 9. The B2 supports a 120Hz panel and 2 HDMI 2.1 ports (out of four HDMI ports). With support for Dolby Vision IQ and Atmos, as well as some screen parameters, these TVs are still serious representatives of LG’s OLED segment.

This series should be taken as an affordable option for a second TV, if you need exactly OLED screen. All specs are understated to the max. There is no HMDI 2.1 and VRR, and the refresh rate is reduced to 60 Hz. But nevertheless, for all the advantages of an OLED panel, the LG A2 series requires much less spending. 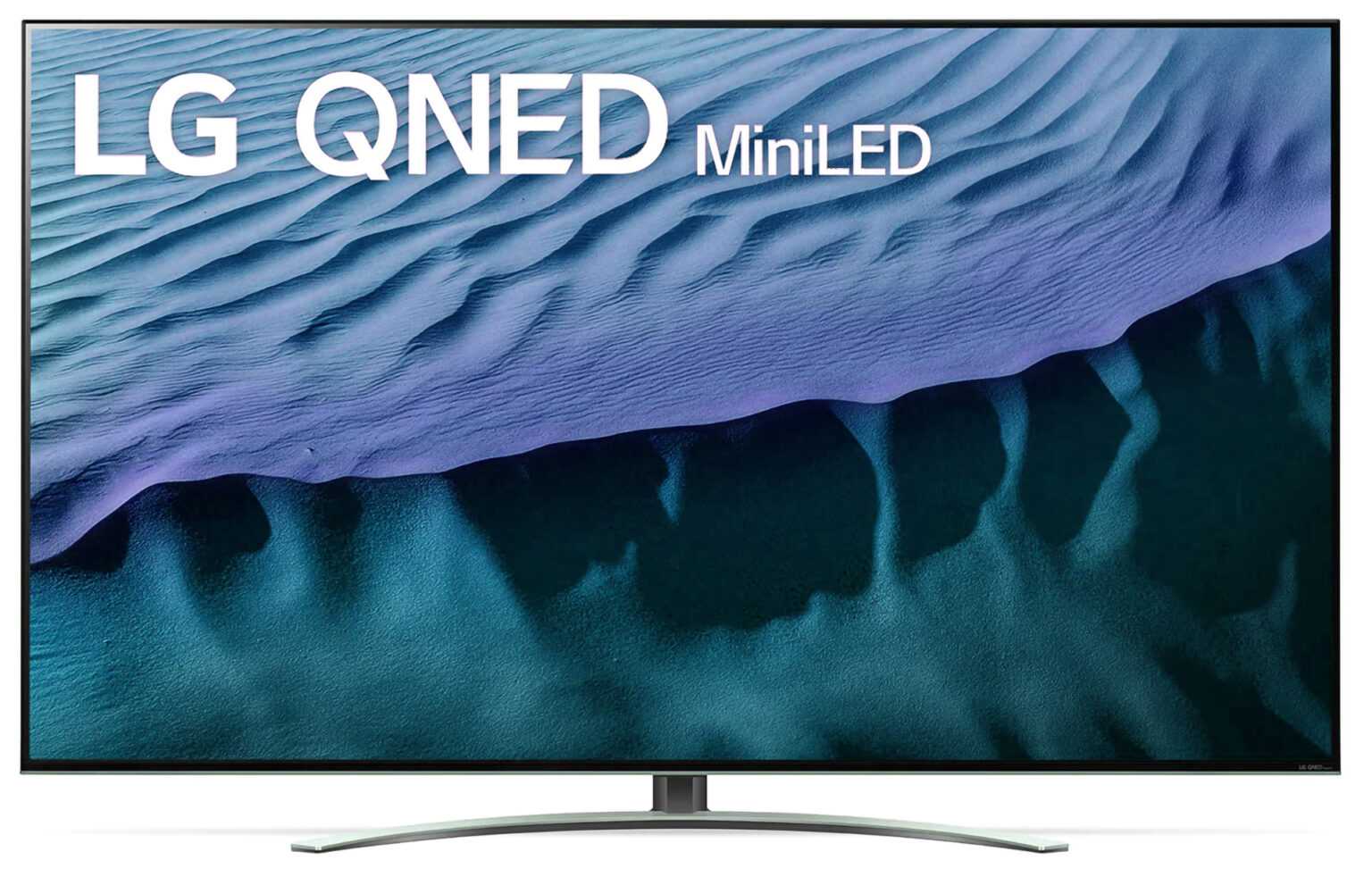 The flagship QNED99 series of 8K resolution TVs with Mini LED backlighting has more than 2,000 zones of local backlight dimming controlled by the Precision Dimming Pro+ algorithm of the Alpha9 processor. The QNED95 series is its simplified version with a smaller number of backlight control zones.

QNED line of TVs is represented by several series. They are all built on Quantum Dot NanoCell panels with mini-LED backlighting. The QNE90 / QNED91 series work with Precision Dimming Pro. QNED86 / QNED87 use Precision Dimming algorithm. QNED80 / QNED81 / QNED82 have Local Dimming and the audio power is reduced to 20 watts.

LG seems to be shrinking the NanoCell 2022 TV segment in favor of Mini LED backlit models. In particular, the series NANO90 / NANO91 is not planned to release. The NANO75 / NANO76 / NANO77 and NANO80 / NANO81 / NANO82 lines remain. The series differ from each other by the absence / presence of local darkening. Within each group the design is different. 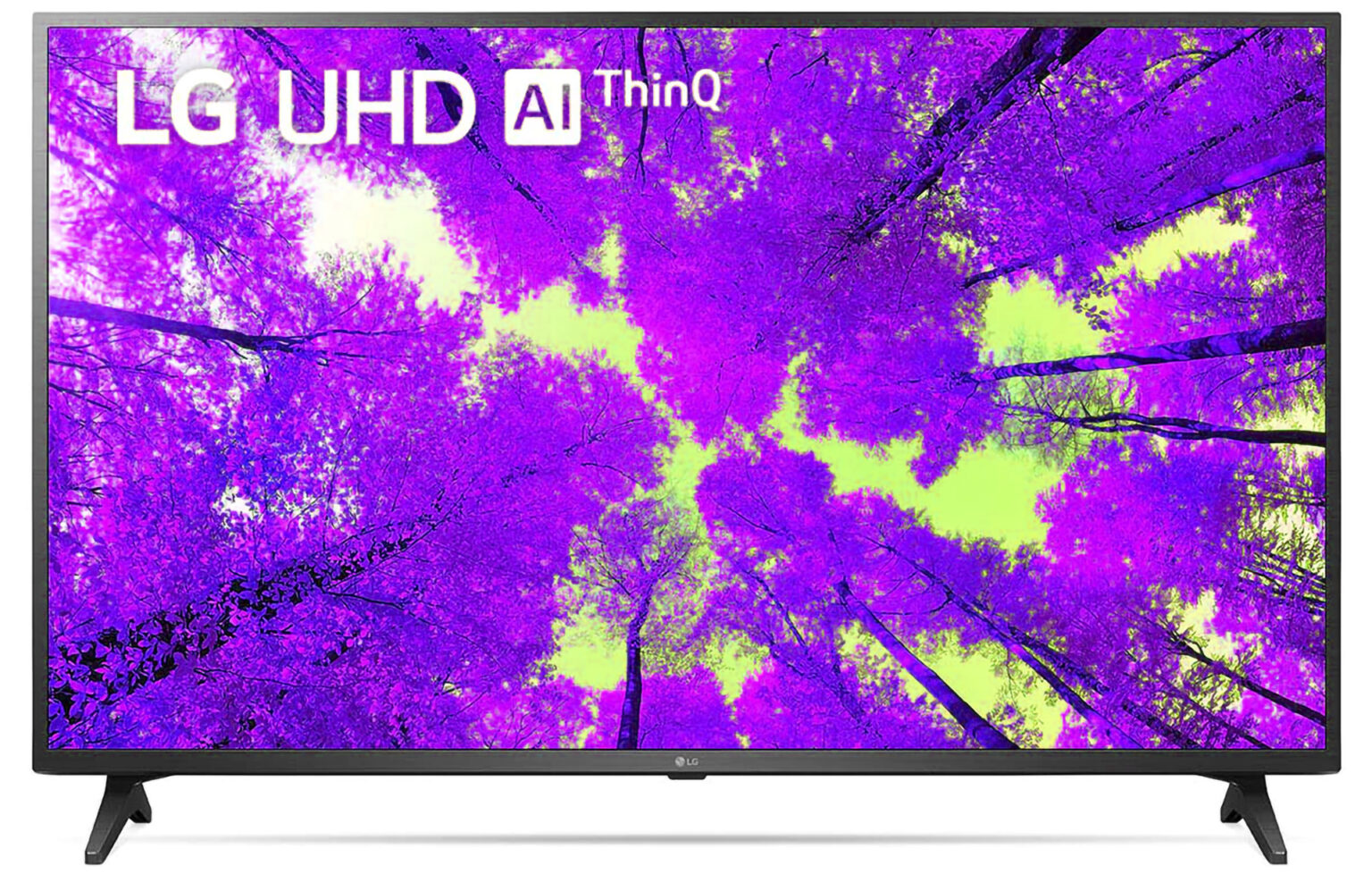 The production of TVs with conventional LCD panels continues. They don’t have high brightness or deep blacks. They have fewer gaming options and various “enhancers” of the image. But nevertheless they quite confidently fill the niche of additional family TVs at a low price. LCD TVs LG TV 2022 lineup is represented by series UQ90 / UQ80 / UQ75.