The new MacBook Pro 13” is due out in spring 2022. It will be the only model that will retain the Touch Bar. What else is known about the novelty – told in the article. The updated 13-inch MacBook Pro 2022 will come with the M2 chip, in a familiar design. The novelty will get an improved 1080p camera and a MagSafe charging port.

Old design
No SD card reader.
Last year, Apple showed off updated MacBook Pro 2021s: the 14-inch and 16-inch. The new devices lost the Touch Bar, got a more oversized design with sharp edges, and were equipped with the M1 Pro and M1 Max chips. At the same time, the company left the current MacBook Pro lineup with a 13-inch model with the M1 chip and Touch Bar. For a long time, no one understood why Cupertino did this.

But recently rumors started to appear, which point to the MacBook Pro 13″ (2022, M2) update. In this article we have collected all the specifications of the new product, release date and price. 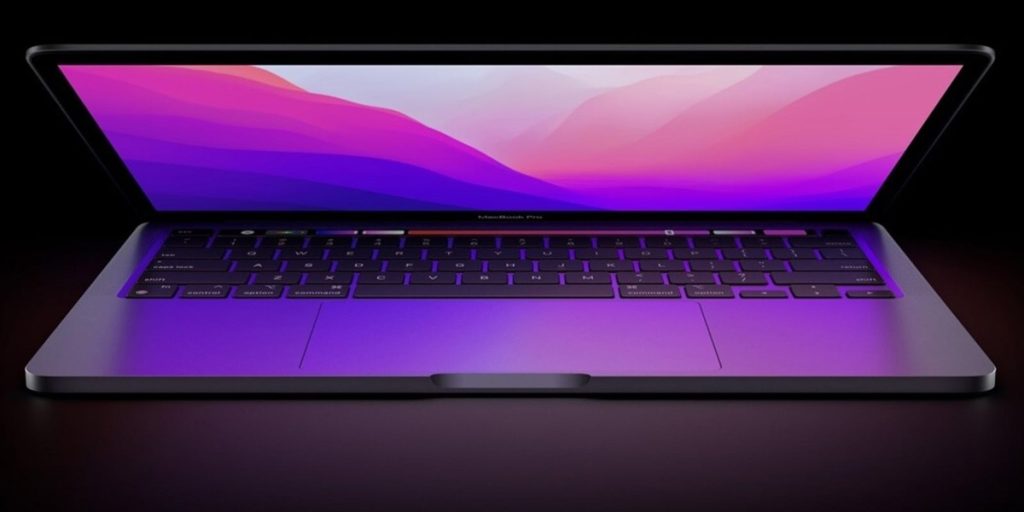 When will the new MacBook Pro M2 be released? Right now, it’s hard to tell an exact launch date for the new MacBook Pro 13″ (M2). It could either be in the spring of 2022, when the MacBook Air 2022 is introduced, or it could be in the fall of that same year. We do know that there will be one MacBook at the spring presentation. The company has already registered its model with the Commission.

That said, Apple may well do something completely different: instead of the Air version, show an updated MacBook 13″ on the M2 in the spring. This way the company will remove the prefix “Air”, as it has long wanted, and keep the model on sale. The new product is not expected to get a redesign. According to insiders, the MacBook Pro 13″ with the M2 chip will have a Touch Bar. It won’t get an updated mini-LED display, a customizable ProMotion refresh rate of 120 Hz. The only thing that might change in the design of the MacBook Pro 13″ (2022) is the addition of the new MagSafe port that appeared in the MacBook Pro 2021.

Considering combining the Air and the 13-inch Pro 2022, we could be looking forward to new case colors. According to insiders, it could be blue, green, and all the other colors of the 24-inch iMac. This would dilute the palette of Space Gray, Gold and Silver MacBooks, which are introduced now.

Ever since the release of the M1, insiders have been talking about a sequel to Apple’s Silicon chip generation coming soon. We’ve seen the improved M1 Pro | M1 Max, but that’s far from the limit of Apple’s prospects. The company will probably introduce the M2 chip this spring. It makes no sense for Cupertino to introduce a professional chip in a fairly budget device (which the new MacBook Pro 13″ (2022) should be). Therefore, it is logical to assume that the novelty will be exactly M2.

According to rumors, the updated system-on-a-chip will still have an 8-core CPU, but will increase speed and efficiency. It is likely that 9-core and 10-core GPUs may be offered in the M2. In comparison, the M1 now has 7-core and 8-core GPUs available.

Another major update that many people have been waiting for. Right now, only the MacBook Pro 2021 comes with a 1080p camera. With the introduction of this kind of camera resolution into the new product, it could be a good reason to choose the newer version over the more affordable used one. Considering the minimal updates to be implemented, we can assume that Apple will not raise the price of the novelty. A price tag starting at $1,299 seems pretty reasonable, if you set aside the fact that Apple may merge the MacBook Air and MacBook Pro into one device.