A good choice if you don’t have time to wait: MacBook Pro M2 review 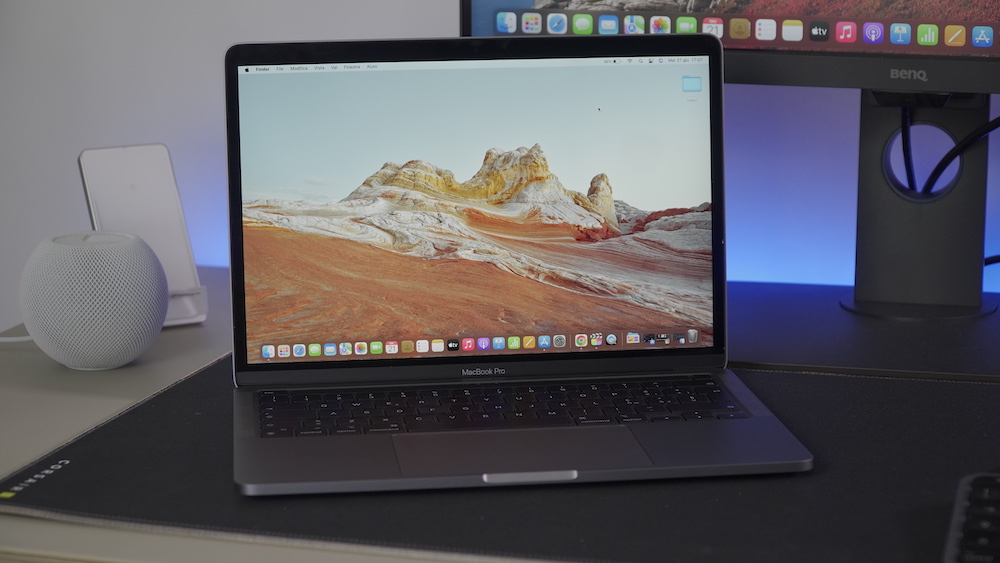 I absolutely don’t care what the MacBook Pro M2 shows in synthetic tests. Yes, that sounds pretty weird from someone who makes a living doing those very tests, but it’s clearly not the kind of device where benchmark numbers matter that much – if they matter that much to you, you can tell right away that you shouldn’t buy this laptop. 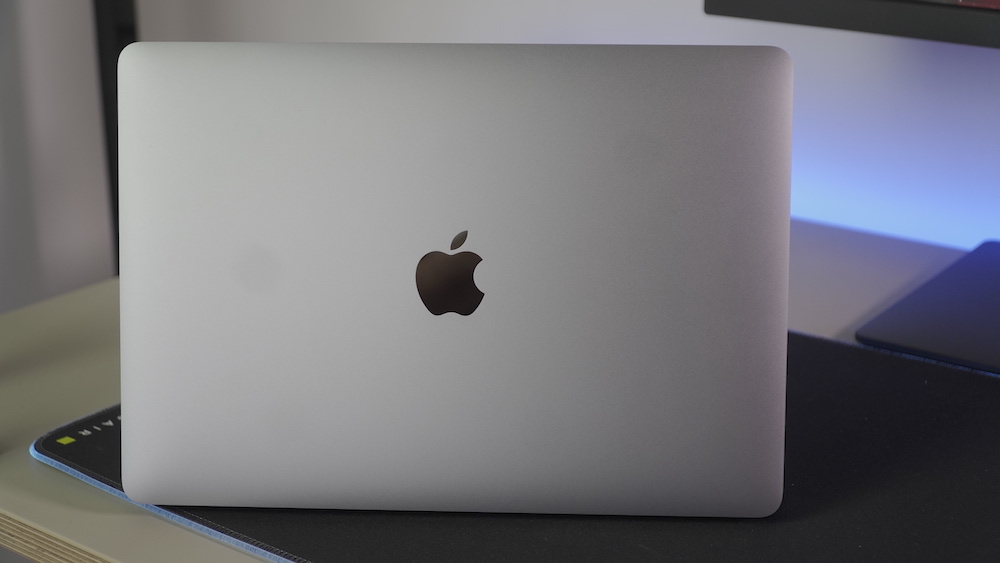 It’s also worth clarifying a bit – this MacBook Pro is assembled in the same chassis as the 13-inch MacBook Pro on the M1 released in 2020 (which, in turn, used the design introduced in 2016). It uses the same 2560×1600-dot screen, the same Magic Keyboard, the same two Thunderbolt ports, the same touchpad above the keyboard. And remember all those cool tech innovations (old for the rest of the market) like the HDMI port, SDXC card slot, and MagSafe charging that Apple installed in the newest MacBook Pro in late 2021? There’s none of that here. No state-of-the-art Mini LED display, no advanced 1080p webcam.

In fact, Apple has only made one change to the MacBook Pro since 2020: a new M2 processor. Yes, the company also added an option in the form of 24GB of RAM, the speakers now support Spatial Audio technology, the power adapter is now as much as six watts more powerful, and the headphone jack supports high impedance models, but most importantly, the processor. Like the M1, the M2 is Apple’s proprietary ARM processor. It has more transistors than the M1, more memory bandwidth and an updated media engine, plus there are extra GPU cores (10 vs. 8 for the M1). It’s a new processor in a rather outdated package, yes. For testing, Apple sent me a laptop model powered by the M2 processor that’s a notch above the base model — there’s 16GB of RAM and a whole 1TB of built-in memory. On Apple’s official website, this version costs $1,899, while a 14-inch laptop with the M1 Pro and the same specs of RAM and built-in memory costs $2,199.

This means that the MacBook Pro with the M2 is only a couple hundred dollars cheaper than its much more capable and modern 14-inch counterpart. But for that couple of hundred dollars the user will get a lot of advantages, which will be especially useful to people who work with graphics at a professional level. I’m talking about a larger display, MagSafe, more ports, additional graphics cores and more. It should also be understood that the M1 Pro has more performance cores, while in the M2 manufacturer has implemented more energy-efficient cores, which are needed to increase the battery life of the laptop.

We’ll talk about benchmarks a little later, but now we’d like to spoil the surprise for everyone – the M1 Pro easily beats the M2 in most situations. For example, in some of our standard tests M2 sometimes lags behind almost twice. Naturally, for $200-300 this advantage in professional activities will be more than justified.

So I think the target audience for the MacBook Pro on the M2 is not people who will spend all day exporting something to Premiere. The target audience for this laptop, as far as I can tell, is people like me. I spend most of my day on Google Docs, spreadsheets, and Slack. Accordingly, a 14-inch MacBook Pro is too much for what I need to do, and it costs more than I want to spend. That said, sometimes I need to do something in Photoshop, Lightroom, and Audition, plus sometimes (very occasionally) I want to play games – and I’d like a laptop to handle the load. 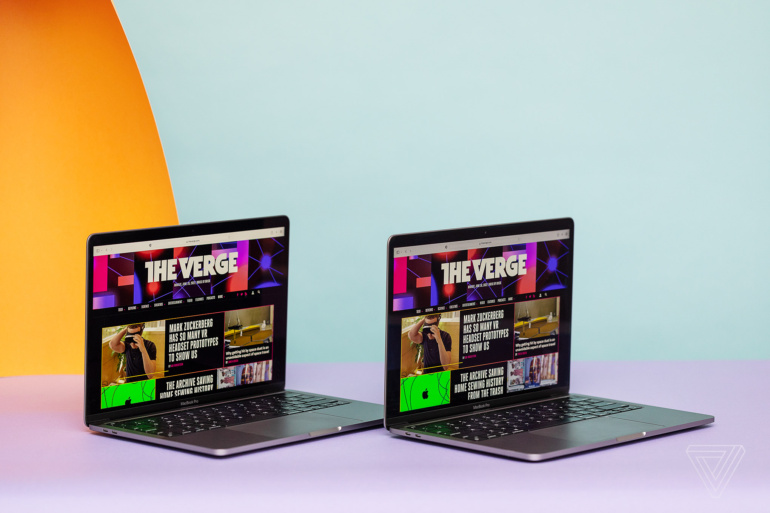 Twins .
Yes, the new Air isn’t currently available for pre-order yet, but this model looks like a much more acceptable choice for my usage scenario. And that puts the 2022 MacBook Pro – and this review as a whole – in a rather odd position.

A good choice if you don’t have time to wait: MacBook Pro M2 review – Usage Scenarios. 2
Apple hasn’t changed the webcam – it’s still 720p
Now, honestly, I can’t answer the question of whether anyone should buy this MacBook Pro, since I don’t know how good the new MacBook Air is. But I can already tell you how well the M2 performs and what advantages it has over the M1. In a nutshell, the M2 is productive and energy efficient. And the M1 was productive and energy efficient, too.

The MacBook Pro 2022 has quietly withstood impressive loads for a long time – the results in benchmarks were the same regardless of whether the device was running on power or battery power, which is certainly very rare on Windows laptops. And while having an active cooling system traditionally distinguishes the MacBook Pro from the MacBook Air, I never heard a fan noise, even when running games. Admittedly, the same can be said for the MacBook Pro on the M1 – all the positive qualities remain.

But how did this laptop perform in benchmarks? In Geekbench, Cinebench, Xcode, and other synthetic tests, the M2 laptop performed slightly better than the M1. In graphics tests, including some video games, the results are significantly better, but this is worth talking about separately.

What’s more, the M2 edged out the more expensive M1 Pro in single-core tests – this is impressive and indicates that the M2’s separately-performing cores are indeed more powerful. And that, of course, is good news for the upcoming M2 Pro, Max and Ultra. Exclusively for the ticker there is technical progress, but the difference between the M1 Pro and the M2 in most scenarios is much larger than the difference between the M2 and the M1. This just underscores the fact that it is more advantageous to take the M1 Pro for those scenarios where the user regularly loads the system. Yes, just $200-300 does give you a lot more performance. But much more interesting is how much better the M2 handles tasks for which the M1 Pro is too powerful. In fact, I put two MacBook Pro laptops (the M1 and M2) side by side and did most of my daily work on both models. And in some situations the M2 notebook performed better – it was a few seconds faster to open a 350-page document in Google Docs, spreadsheets with hundreds of lines scrolled much smoother on it too, and switching between tabs was faster.

The MacBook 2022 also performed better in gaming (but I stress that this is just a demonstration of improvements from Apple – don’t buy a MacBook if you want to play games). The previous MacBook Pro ran the Shadow of the Tomb Raider benchmark at an average frame rate of 20 FPS, while the M2 laptop showed 29 frames. That’s almost 50% better, and it’s the kind of difference you can notice with your eyes just by watching the test run. When I worked with Swift Playgrounds 4, the M2 laptop was a little faster loading some interfaces and animations. Additionally, I was using Audition, adding various effects to the audio track that put a lot of load on the CPU, and the M2 was a bit faster at those tasks. Admittedly, I don’t think any of this would have really made a difference in my life if I hadn’t been using laptops side by side, but this time savings will probably have an impact in the future after a long period of time has passed.

But there have also been situations where I couldn’t see the differences between the laptops, even though I actively sought them out. Working in Photoshop, where I bleached some images and added a few basic filters, was about identical. In Lightroom, too, I didn’t notice a difference. Also, most of the things you normally do in Audition (like playback or switching between projects) performed equally well on both laptop models.

The results in Premiere Pro, on the other hand, were strange. The M2 notebook did outperform the M1 variant in the Puget Systems test for Premiere Pro, which tests real-time content playback as well as the content export feature. But I didn’t really notice any significant difference between the laptops in the content export process. Moreover, M1 even finished first in most cases, because M2 often gets stuck on certain graphical elements. I will not go into details, because Premiere Pro is a very finicky software, and the manufacturer can not always do something about it.

But the MacBook Pro with M2 has one significant advantage compared to its more expensive sibling – we’re talking about battery life. This MacBook Pro just doesn’t die, whereas the 14-inch laptop on the M1 Pro loses all of its charge after 10 hours of active use. In this case, I was working quite actively – running Premiere, Audition, programming, even running video games. And I still saw that after eight to nine hours of constant use, the laptop was still showing half of the battery charge. Based on the results I got, I expect a total battery life of 17-18 hours.

And, naturally, that makes the new MacBook Pro a tempting purchase for someone who spends a lot of time in different places using a laptop as their primary work tool. For me, the battery is a more important factor than overall performance. But I keep reminding myself that the Air is still out. And the Air has the same processor, so it will likely have a similar battery life (although Apple claims the Pro model lasts up to 20 hours, while the Air only lasts up to 18 hours).

High-tech journalists often complain that upgrading a processor is too boring, but I think in many ways they’re unfair. I’m writing this review on my MacBook Pro on an Intel processor that has only four hours of battery life, has fans that are constantly making noise all over the office, and slows noticeably when I have more than 12 tabs open. The new processors are actually changing the idea of what people can do on their laptops – they let you do a better job and do more tasks.

A good choice if you don’t have time to wait: MacBook Pro M2 review – Review. 1
But with the M2, the story is a little different. It’s an impressive processor, and it’s faster than the M1, allowing Apple to keep up with competitors like Intel and AMD. But I would be very surprised if the M2 would allow you to run a program, apply filters, or use any tool that didn’t work previously on the M1. That said, the main advantage over the M1 Pro (barring price and a slight advantage in single-core tasks) is battery life. And it’s a huge advantage, but I won’t praise it much until I have a new MacBook Air in my hands.

Whether you like the touchpad or not, it’s still here
And that leads us to the natural question – is it worth buying? If you need to get a laptop today, yes. If you’re currently using an Intel-powered MacBook (and if you are, you obviously want to upgrade), upgrading to the M2 would be a huge leap. You’ll get all the benefits of the M1 that we admired in 2020, plus extra performance and extended battery life.

But if you’re not constrained by a deadline, it’s worth waiting for the MacBook Air. This laptop will bring a number of advantages that the Pro version doesn’t have. But of course, it may also have drawbacks that we don’t know about yet. So yes, the new MacBook Pro could be a good buy for some users, if the MacBook Air turns out to be too specific, but you need to see it at least first.