The Nothing (1) phone, with which its creators aspire to shake up the stagnant morass of the Android world, should finally be available in July. The startup Nothing, founded by Carl Pei, the former head of OnePlus, has already launched the transparent earpiece Nothing Ear (1) and a while ago unveiled the first official look at the design of the Nothing phone (1).
Nothing has generated a lot of interest among Android enthusiasts. Carl Pei has already succeeded in the past in spreading the OnePlus brand in the West and now has high expectations for the release of a smartphone with similar flagship killer ambitions, while only a few brands are now releasing top-of-the-line Android smartphones. By April, the startup Nothing had raised more than $144 million, of which $63 million came from investors in the Android community and the rest was venture capital investment. Clearly, Pei has managed to convince people to buy a phone that he says will be an “attractive alternative” to Apple.
But what is the Nothing phone (1) and how does it differ from other Android phones? Android Central chatted with Carl Pei on his podcast, who provided new information about the phone’s design, but otherwise withheld specific details, such as specs and performance.
We still don’t have the full picture, but now we know more about what the Nothing Phone (1) will look like, and from the rumors and official information that’s out there, we can imagine what we can expect from its specs and UI.

Nothing Phone (1): Everything you need to know about new phone

Not so long ago came out Nothing Phone 1. We decided to break down the specifications in a full review of the Nothing Phone and compare it to the iPhone 13. 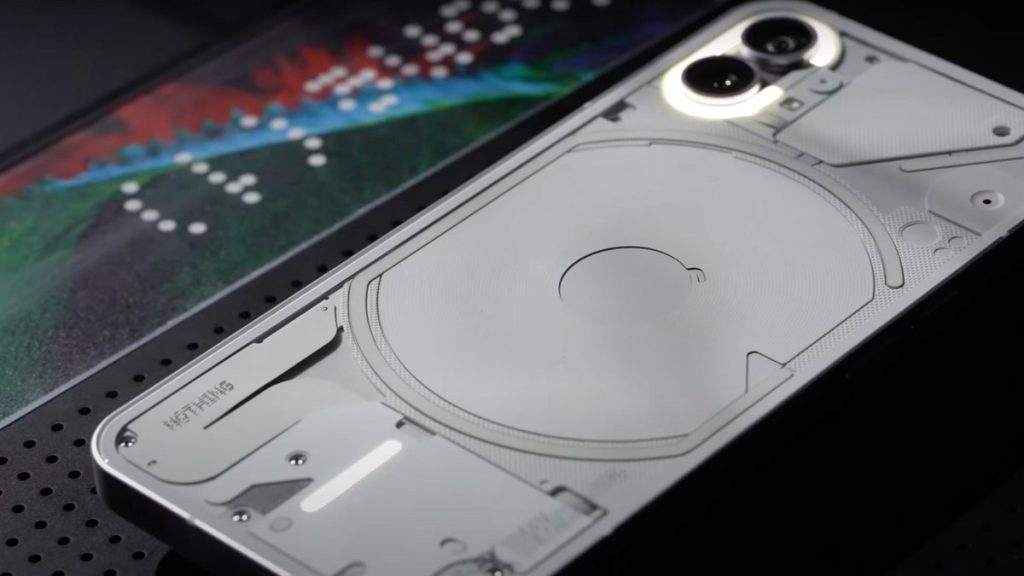 Not a bad phone at a fairly affordable price. Has a nice and interesting design with a transparent cover, backlit glyphs and a good camera (50MP + 50MP main, as well as 16MP front). Runs on Android and has branded headphones.
Cons
Limited edition
Not too powerful processor
Not as good camera
Transparent iPhone with Android – that’s what you can call the new Nothing Phone, if you don’t go into the specifications. The new model looks interesting, so there is a lot of interest. We decided to do a review on the new product and talk more about its features, design.

Pros and cons of Nothing Phone 1 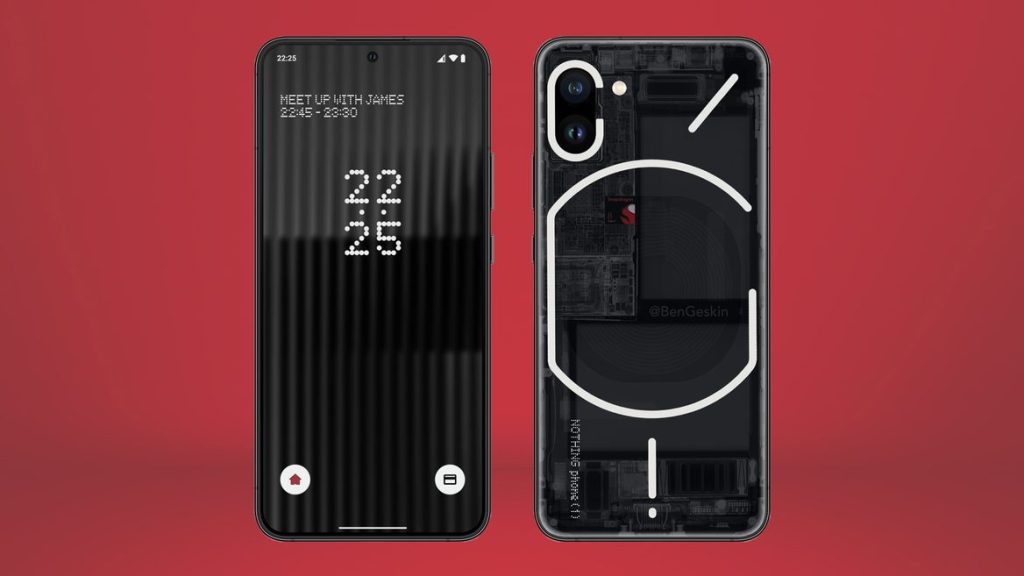 The debut of Nothing on the smartphone market can be considered a success. Nothing Phone (1) is a very interesting smartphone. And not only because it is the first for a young promising brand. First of all, the novelty captivates by its design. Among hundreds of similar smartphones, Nothing managed to offer something really new. It would seem that, well, shines and shines, what’s wrong with that? But it’s catchy! And this backlight has not only a decorative sense, but is also quite functional. Though I must admit not everyone will like this kind of cyberpunk.
According to the characteristics we would like to call Phone (1) the best. However, it is not without compromises. It is not the most powerful platform, the camera has noticeable problems (gradually corrected in updates), the screen could be brighter, the kit does not have a power adapter, and in general by today’s standards 33-watt charging can hardly be called fast. There is another important nuance: to repair the Phone (1) in case of what will be not just problematic, but probably impossible. Services are unlikely to find suitable components, the smartphone is too unique. And accessories are still difficult to find: on AliExpress it was possible to find only one case for Nothing Phone (1), but already quite a wide selection of protective films and glasses. Many people will think that the price of 469 euros for the Nothing Phone (1) is high. And in some ways will be right, because for this money you can buy a Chinese device from a traditional brand with a more powerful processor. But will it give you the same experience? Probably not. The Nothing Phone (1) seems to me more like a smartphone for enthusiasts and those who want something very unusual. In this case, it’s a good choice: the “wow effect” is guaranteed!

Among the main advantages of the Nothing Phone 1 are the presence of a large amount of RAM, a fairly powerful camera, a nice price and a large display. Among other things, the company has promised four years of support for security updates, which is not unimportant. At the same iPhone (even older versions) receive security updates to this day.
An interesting feature that sets the Nothing Phone 1 apart from the others is its design and notification system with a backlight on the back. It also acts as a flash for night photos, which improves their quality.

The design of the Nothing Phone 1 – the main feature?

The specifications of the Nothing Phone 1 for its price is not bad. Of course, the iPhone 13 these indicators: even an impressive 50MP camera does not give the desired effect and can shoot up to 4K 30fps, ultra-wide lens has its limitations (up to 114˚ coverage). That said, the design of the new product is the main feature of the Nothing Phone 1. The transparent body is available in two variations: black and white. Both look incredible framed by Gorilla Glass with transparent components and bright backlighting. Nothing calls the backlighting of 900 LEDs glyphs, it is divided into 5 elements that are illuminated, can be customized for notifications, calls and sync with music. The bottom glyph acts as a charging indicator, over time the company will be able to release new updates with new features for backlighting.
The Nothing Phone 1 is quite similar to the iPhone 12 | iPhone 13 in appearance, thanks to the angular design, the familiar camera layout and shape from the iPhone XS. Like the iPhone, the power button is on the right side and the volume buttons are on the left. On the bottom edge you have a single speaker, a SIM card slot and a USB-C port. However, there is no quick switch to enable silent mode here.

The display of the new product 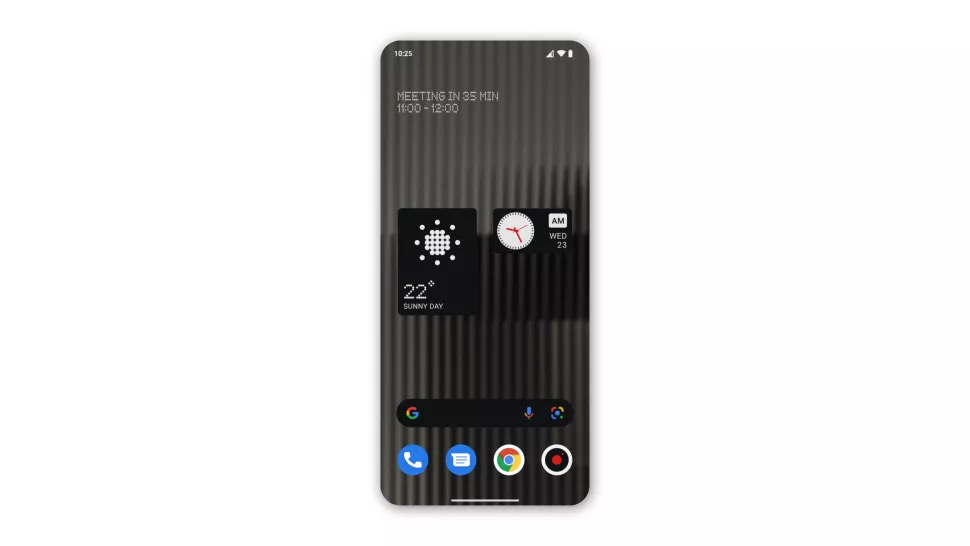 The Nothing Phone 1 has quite large frames around the display. At the same time, for the price of a novelty, it has good screen characteristics and available 120 Hz. When all iPhones up to the iPhone 13 Pro do not have a configurable display refresh rate above 60Hz.
The Phone 1 is a pretty bulky and big phone. It surpasses the iPhone 13 Pro with a display size of 6.55-inch, it is even thicker than the largest iPhone 13 Pro Max.
The novelty’s standard brightness is 500 nits, when in the iPhone 13 it can reach (in normal mode) 800 nits. The difference will be noticeable when using the smartphone outside on a clear day and processing photos. That said, the peak brightness is 1200 nits in both models. The Qualcomm Snapdragon 778G+ chip is a mid-range that has been slightly improved for Nothing. With new features, the device supports wireless charging and reverse charging. Foreign testers note that the performance is not bad and on the novelty you can play resource-intensive games like Genshin Impact, although the smartphone noticeably heats up while doing so.
The maximum wireless charging speed is limited to 15W, but if you want you can use 33W wired charging, which will power the smartphone up to 50% in 30 minutes.

Battery life is 16 hours of active use. This is not a bad indicator when compared to the iPhone 13.

The operating system and operation

Nothing runs Android 12, which has been slightly modified with fonts, monochrome wallpaper and widgets. It looks pretty interesting, but otherwise it’s the familiar Android we know.

With the help of third-party APIs Nothing plans to expand features. For example, adding Tesla unlocking with your smartphone. It is interesting that Nothing has launched the NFT series with their smartphone, so it is possible that special features related to NFT popular collections owners will be added (maybe there will be an album in the Gallery). We would like to remind you that the Nothing Phone 1 is the company’s first phone, so there may be problems with productivity and performance. So far, Western media and bloggers have not noticed outages and bugs, but everything can be. Usually, all companies learn from the first model. We don’t know if the Nothing Phone 2 will ever come out, though.

When was the Nothing Phone (1) release date?

The Nothing Phone 1 is available now. The smartphone was fully revealed during a Nothing reveal event on July 12 when the company also announced that it’s officially for sale in markets where it’s available.

Don’t expect a miracle from the 50MP dual main camera and 16MP front camera of the novelty. In the end, one way or another, you will get 12MP images, which will not be bad if the lighting is good.
You can not say that the smartphone shoots worse than the iPhone 13, because it shoots for its price range. That is, it’s not bad. In low light conditions, you can use the glyph light or flash. The night mode here is the usual, without any built-in LiDAR and frills: so to compete with the leaders of the photo regarding the night shooting it is difficult.
The Phone 1 can record 4K video at 30 fps or 1080p at 60 fps. The front camera is limited to 1080p 30fps. Not bad performance, but it won’t be enough for a blogger.

Nothing Phone 1 review and price(cost)

As it had to be proven, the Nothing Phone 1 is a test model for a new company that is just entering the market. On the one hand, they made a pretty good debut, with an inexpensive smartphone, interesting features, a decent camera and an interesting interface with branded fonts. On the other hand if you are not buying it for fun you can get a second-hand iPhone 12 for $475 and it will be relevant and stable for at least another 5 years. So Nothing Phone 1 is more for image and startup fans.
Is it worth buying now? I think we need to wait for at least the device tests and reviews after 3 months of usage when we will know if the battery is well optimized, how the charging works, if there are any special bugs and if there will be any updates. Then we can look more closely at the proposals and buy Nothing Phone 1. In the meantime, there are much more worthy options for buying a smartphone in 2022.