Samsung’s The Frame 2021 is a continuation of the QLED line and the successor to Frame 2020. Like its predecessors, it displays artwork or photos on its screen when the TV is not in use. Frames can be selected to match your interior. The Samsung 55LS03A TV uses a VA panel with an outstanding contrast ratio, making it a great device for viewing in a dark room. Note that the viewing angles of VA matrices are below par, so the option in question is not the best choice for a huge audience. Consider the Samsung QE55LS03A 4K HDR review as a member of the Samsung The Frame 2021 lineup.

The Samsung LS03A series has an acceptable pixel response time and black frame insertion feature for crisp images in fast-paced scenes. Interpolation is available at a lower frame rate for smooth motion.

Despite its response time, the LS03A has low input latency, VRR support and can display 4K@120Hz content thanks to its HDMI 2.1 port. Unfortunately, the series in question lacks local dimming, and the maximum brightness for HDR is insufficient to highlight highlights on the screen the way they are displayed on advanced models. 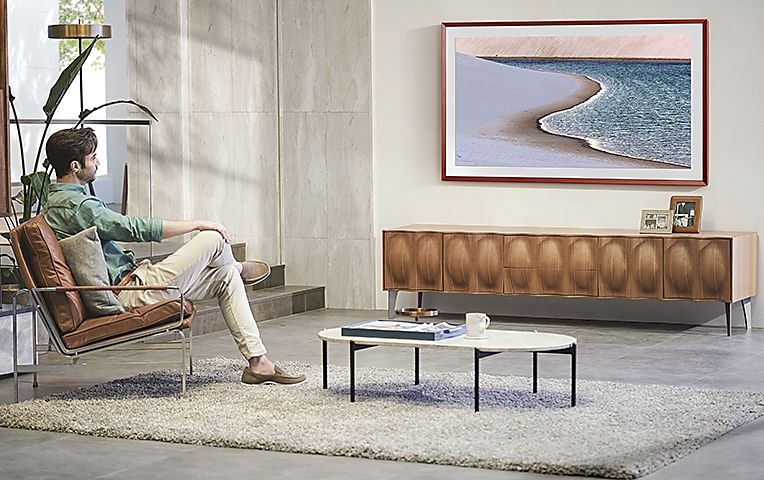 It’s worth recalling that the Samsung Frame 2021 models belong to Samsung’s Lifestyle TV lineup, which includes such models as Samsung The Serif, Samsung The Terrace and Samsung The Sero. Overall, the unique features of the Samsung LS03A make it difficult to compare with other TVs in today’s 4K TV market.

The appearance of the Samsung Frame 2021 is very similar to its predecessor, Samsung The Frame 2020. As before, the series is equipped with a One Connect box, so only one cable leads to the screen, but the TV itself is much thinner than the 2020 models. The legs of the stand have been slightly redesigned. It is now possible to adjust the height of the screen. 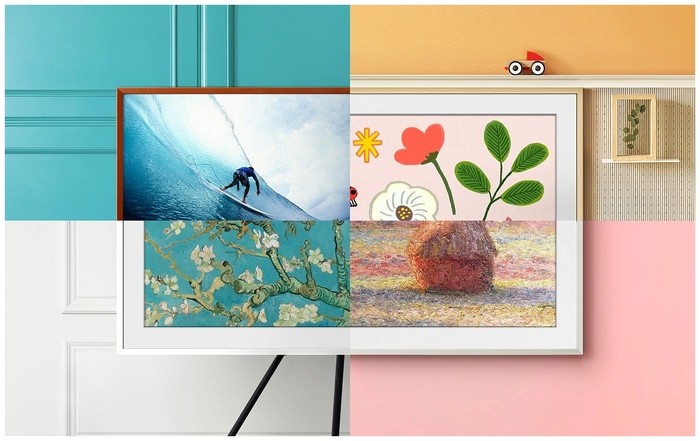 In general, the bottom edge of the screen is now “adjustable”. The Samsung 55LS03A TV comes in a black version of the decorative slats. Additional decor colors are beige, brown or white. They are purchased separately and installed independently.

The legs of the stand can not be confused, but they are adjustable in height. Now you can place a sound board or a flat console, such as Xbox Series X, under the Samsung 55LS03A screen. The maximum height to which you can raise the screen is almost 9 cm. The legs of the stand are very sturdy, and the TV practically does not sway.

By the way, there are various stand options for this series, such as a studio stand. This kind of stand “turns out” a picture on an easel. Again, such a stand is sold separately and is not included.

The back of the 55LS03A TV is made of plastic and has horizontal embossing lines. There is a recess in the case for cable routing, which is the only one. It is located in the central part. The wall mount is gapless and is included.

The edge of the screen is slightly thicker than other Samsung QLED 2021 TVs. Samsung The Frame 2021 models are much thinner than last year’s variants. And that’s a bit of a plus, because when using a wall mount, the TV doesn’t protrude far from the wall.

The build quality of the Samsung QE55LS03A TV is excellent. You can feel the professionalism of the designers. The model almost does not bend. The TV stands firmly on the horizontal surface. One connection port on the TV is covered by a decorative cover. 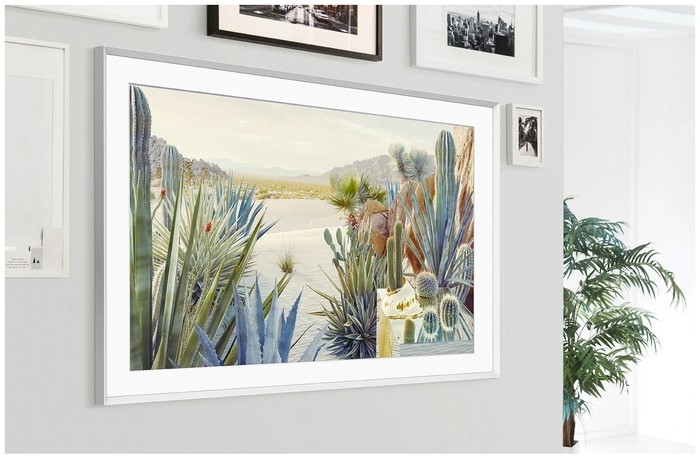 Samsung The Frame 2021 series TVs have an outstanding contrast ratio, which promotes deep blacks and makes these models a great choice for dark rooms. This figure is at 5600:1. However, the LS03A has some drawbacks as well. Like its predecessor (Frame 2020) the novelty did not get local dimming and global improvements in black levels should not be expected.

The Samsung QE55LS03A has impressive brightness with SDR content. The parameters are similar to Frame 2020. The brightness is enough to dampen some glare even in well-lit rooms. After calibrating the SDR brightness in Film image mode with a Warm 2 color tone and MAX brightness, the results are in the 500 to 520 nit range.

If someone prefers to get a brighter image, but lose a little in image accuracy, you can set the “Dynamic” mode at MAX brightness. Then the brightness in the 10% window will be about 590 nits. As a reminder, these models do not have a local dimming feature, but Edge LED backlighting.

Brightness in HDR is fine. The picture is not as bright as last year’s version, but unlike its predecessor, it is more realistic. The image is bright enough to accentuate the highlights of the image. But it’s still a long way from “true” cinematic HDR.

The measured HDR brightness in the “Movie HDR” image mode with maximum contrast and brightness, color tone (set to “Warm 2”) is 630 nits in 10% window. At the same time the “Dynamic HDR” mode was enabled, the contrast enhancement slider was set to “High”.

With some additional settings, you can slightly improve the image if the HDR content is too dim. Here you can set “Contrast Enhancer” to MAX and “ST.2084” to MAX. These settings will result in a much brighter image. By the way, the brightness of HDR in gaming mode is slightly brighter than in normal mode. Black uniformity is good. 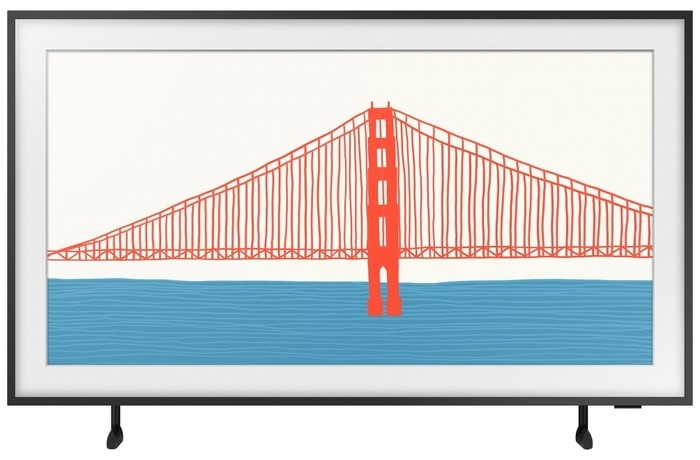 As expected, in most TVs with a VA panel, and Samsung The Frame TV is exactly that, we get “sub-par” viewing angles. The 2021 is slightly better than the 2020 models, but the image still looks inaccurate with a large deviation from the center of the screen. It is strange that the manufacturer, positioning these models as a picture on the wall, uses VA technology.

The Samsung QE55LS03A TV has decent screen glare protection. Models are good for most lighting conditions, but it is best to avoid direct exposure to bright lights, as the reflection of such sources is problematic.

The QE55LS03A uses a sub-pixel arrangement of BGR elements in the matrix. The color depth is 8 bits + FRC. This has no noticeable effect on image quality, but can lead to blurry text. This is especially noticeable in applications when using the TV as a PC monitor.

The color gamut is excellent in Samsung’s LS03A series. The series has excellent DCI P3 color space coverage used in most HDR content. The coverage of Rec. 2020 is also at the proper level. But there is an opinion that there are some problems with the red colors, which can make them look pink.

Samsung The Frame 2021 series has an excellent response time. This is similar to the Samsung The Frame 2020, but the updated version has a higher backlight frequency than its predecessor. Nevertheless, artifacts can be observed in dynamic dark scenes. Pixel response time ranges from 4.3 to 11.8 ms (depending on the area of the screen when measured).

The backlight in The Frame TV 2021 is controlled by PWM. The frequency is about 960 Hz in Cinema mode, which is not noticeable to most users. In game mode, the PWM operates at 480 Hz. The PWM frequency of 120 Hz is set in normal picture modes (Dynamic, Natural, Standard and Cinematic) or in “Game Motion Plus” mode.

The BFI black frame insertion function is present. It improves clarity in dynamic scenes. But to be more precise it is strobing backlighting. We will not give all the settings, you just need to operate it yourself for the best content playback.

The Samsung LS03A series supports FreeSync VRR technology to reduce discomfort during gaming. The TVs don’t officially support G-SYNC compatibility, although some reviews say it works. The feature roughly provides the same settings as the Samsung QN90A QLED. Note that the QE43LS03A and QE50LS03A models have a 60Hz refresh rate and do not support VRR.

Samsung The Frame TV 2021 models have exceptionally low input latency, which will appeal to console fans. Turning on game mode is required to enable the lowest latency. You can also use motion interpolation to make low frame rate games fairly smooth on the screen.

Although this significantly increases input lag. This mode is not recommended. For motion interpolation, “Game Motion Plus” and “Picture Clarity” should be set to custom (“Custom”).

Like the Samsung QN90A QLED, it is not possible to get a true input delay figure when using VRR (incorrect readings of 1 ms). It seems that VRR does not work properly with some video cards. From the values obtained, let’s point out: at 1080p@120Hz, the intputlag is 5.4 ms, at 4K@120Hz it’s 5.5 ms.

Before listing the available interfaces, it’s worth recalling the HDR standards supported. In the Samsung LS03A TV series, these are HDR10, HDR10+, Dolby Vision, Quantum HDR and HLG. All four HDMI ports are 2.0 compatible and one HDMI 4 port is 2.1 standard.

To use it “to the fullest”, you should set the “Game” mode to “Auto”. Two USB 2.0 ports, a digital optical audio output, tuner inputs and an Ethernet port. On board wireless connections BT and Wi-Fi. Recall that the interface part is located in the One Connect box.

The Samsung The Frame 2021’s built-in speakers are mediocre. They are well enough balanced, but lack the bass notes to reproduce deep sound. The power of the 4.0 CH 10-watt sound system is enough, although there is some clunking at maximum volume.

The LS03A TVs use Tizen OS 6.0. This is a user-friendly platform, about which we have repeatedly told UltraHD.su. Externally the control is very similar to Samsung QN85A QLED or QN90A QLED. As usual, there are ads and recommended content on the home screen and in the App Store – this cannot be turned off.

In Samsung’s LS03A series in question, like the other 2021 Samsung QLED lines, the remote has been slightly redesigned. It now has a built-in battery and can be charged via a small solar panel on the back. Charging is also possible through the USB-C port.

There is no charger or USB-C cable included. In addition, the remote has a microphone for voice control. Using the commands, you can change some TV settings, start an application or request some information, such as the weather. But searching for certain content in the Netflix app does not lend itself to voice control.

Results of the LS03A review

To conclude our review of the LS03A from Samsung, let’s summarize what has been said. Samsung’s The Frame 2021 series of TVs is well suited for watching sports. It has a good response time to provide clear images in fast moving scenes. It has a black frame insertion feature to improve clarity in fast-moving scenes.

The Samsung LS03A is decent at handling bright moments on the screen, and overall the brightness of the image is sufficient to combat glare. However, the VA matrix has narrow viewing angles, due to which the image can be blurred when viewed from the side. Therefore, this series is not the best option for viewing a large group.