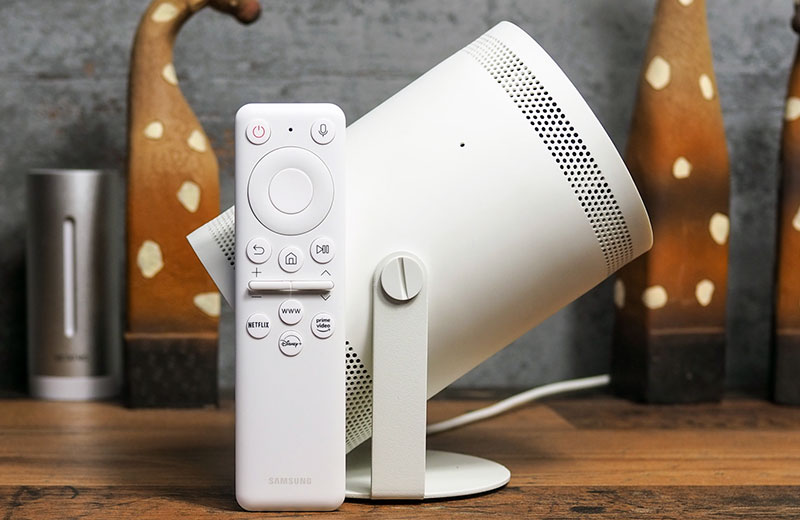 Samsung The Freestyle is a 2022 mobile projector that you can take with you anywhere. It is equipped with many useful features that allow you to turn any flat surface into a screen on which you can watch your favorite movie or video.

The Freestyle is a portable multimedia projector to which we can connect an external image source, such as a computer or smartphone, as well as use the Smart TV feature. However, the capabilities of the equipment do not end there.

The tested device can easily be turned into a color lamp thanks to Ambient mode and a translucent cover to diffuse light. The Freestyle is also handy as a speaker that will play music, such as from Spotify, displaying a colored image corresponding to the track on the wall or ceiling.

And how the gadget works in everyday use, you will learn in the review, which I invite you to read and comment. 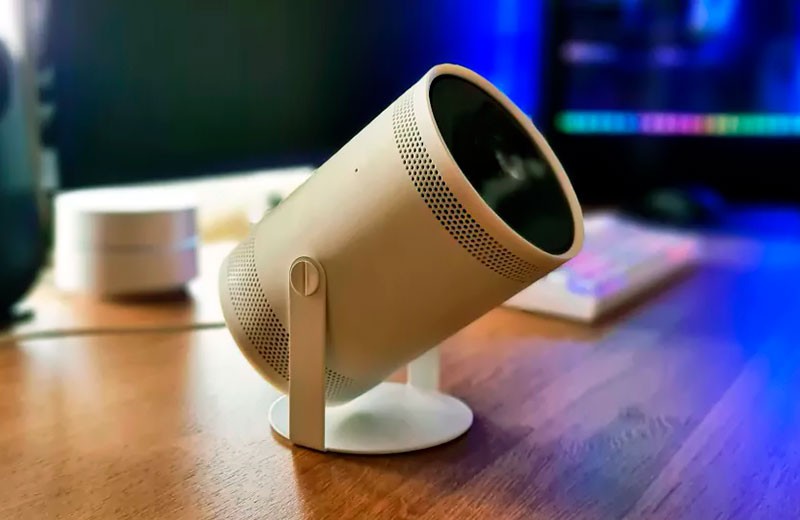 The package with Samsung The Freestyle includes: 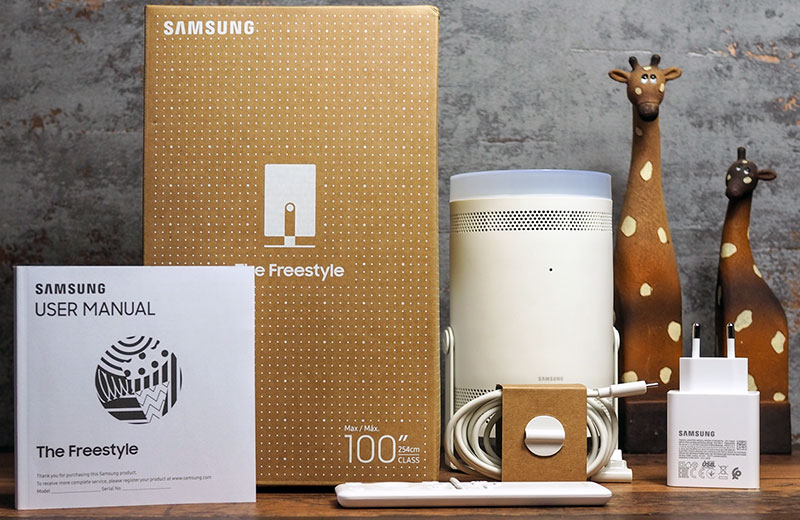 The Samsung The Freestyle portable projector is shaped like a cylinder almost 10 cm in diameter with a height of about 14 cm, not counting the stand and lens cover.

Samsung The Freestyle projector
The Freestyle’s design allows you to mount the device at almost any angle. You can easily direct the image to the wall, ceiling or any other surface.

The Samsung The Freestyle is quite compact and lightweight, so you can easily move it from place to place and take it with you on the road. 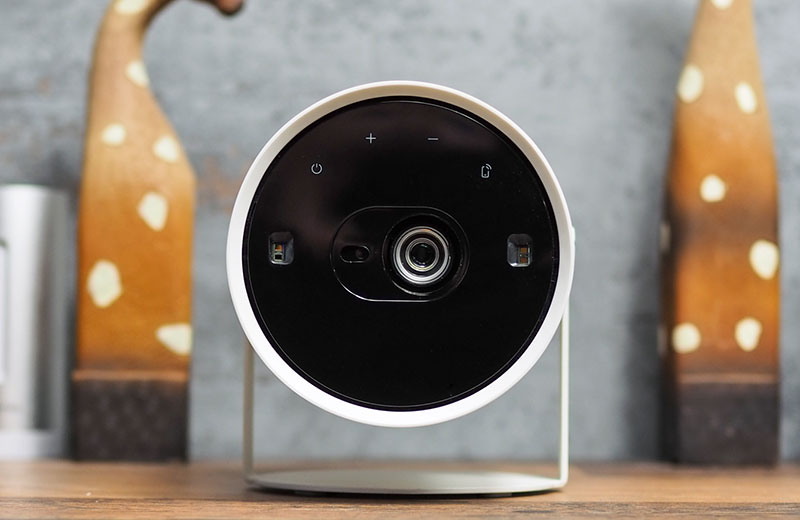 There is a lens on the top side of the projector as well as four touch buttons used for controls (power, volume control, mobile device). As well as distance sensors and a remote sensor/LED indicator. 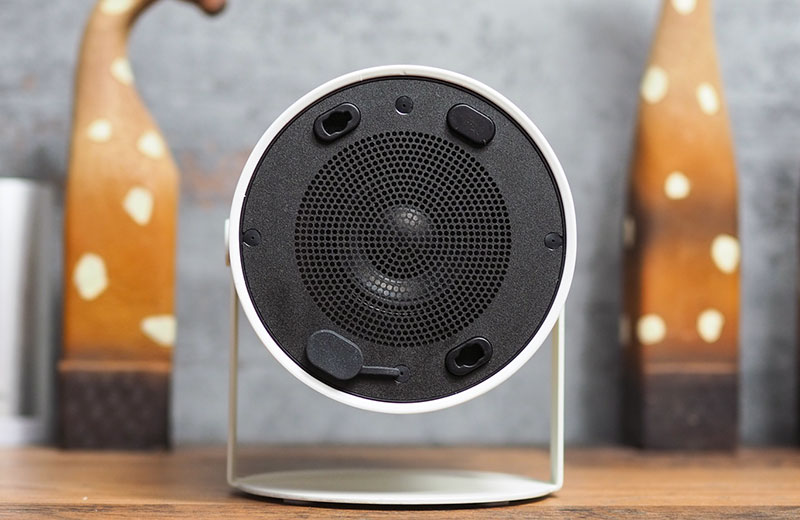 On the side of the case, there are vents and attachment points to the base. There are HDMI and USB-C connectors and a physical microphone switch. The manufacturer also placed a speaker, on the bottom of the projector. When the Freestyle is oriented vertically, the sound is evenly distributed throughout the device.

Samsung The Freestyle from the side Installing and setting up the projector

To start using the Samsung The Freestyle, simply plug it in and turn it on. 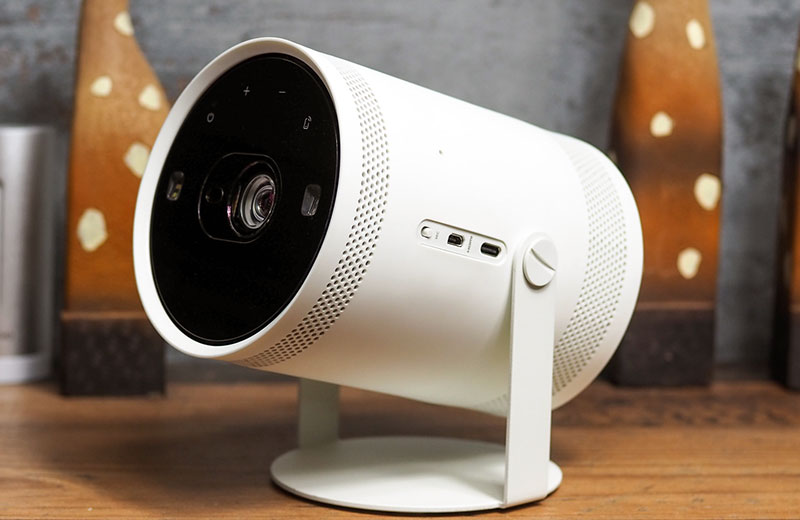 Setting up the Samsung The Freestyle
Next, the device will ask for an initial setup, which you can do using the SmartThings app on your smartphone (I chose this method) or using the remote control that comes with it. The entire setup process is complete with step-by-step instructions, so everyone should be able to handle it. 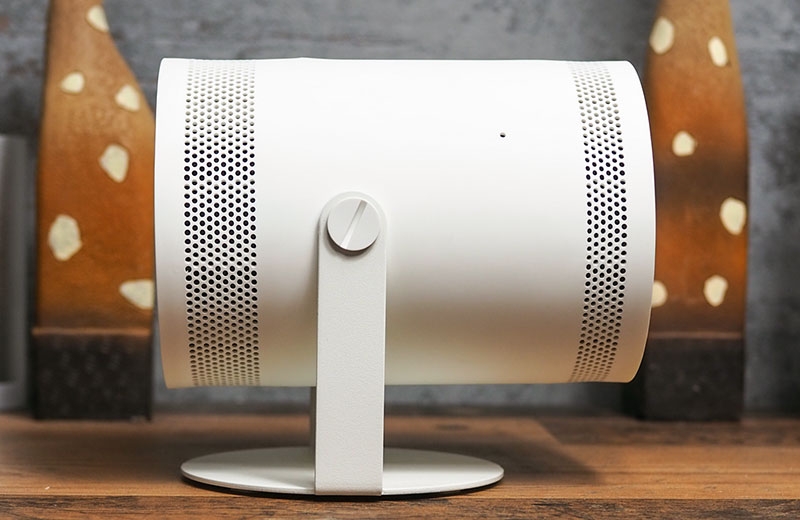 When we finish the initial setup, we see the Smart TV desktop known from Samsung’s new TVs. This provides quick access to the built-in apps and projector features. If something is missing, additional applications can be found in the store and installed.

Samsung The Freestyle’s connectors and ports
One of the initial steps in setting up is to connect the projector to Wi-Fi, it makes the Internet the main source of content consumption.

The source for the Samsung projector can also be an external device connected via microHDMI cable or wirelessly. In this way, it is easy to display, for example, a photo from the smartphone

with the SmartThings app installed.

Controlling Samsung The Freestyle
Among other things, you can remotely control the projector such as the remote control, select the image or sound source from connected devices, applications installed in projector memory, and manage the Ambient Mode function. The Samsung The Freestyle is primarily a multimedia projector designed to project images onto a flat surface.

Samsung The Freestyle test
The design allows you to display a picture up to 100 inches on almost any flat surface – wall (including tilted), ceiling or floor. Most importantly, The Freestyle has a wide range of options for adjusting projection geometry.

All you have to do is set the projector in the right direction and wait a bit to see a rectangular-shaped screen with the right sharpness.

Samsung The Freestyle at work However, there are situations where the automation fails. Then you have to manually remove the trapezoidal distortions or set the optimal sharpness. You can reduce the picture by up to 50%, and even move it around. The latter is only possible on the visible area of the image at 100% magnification. 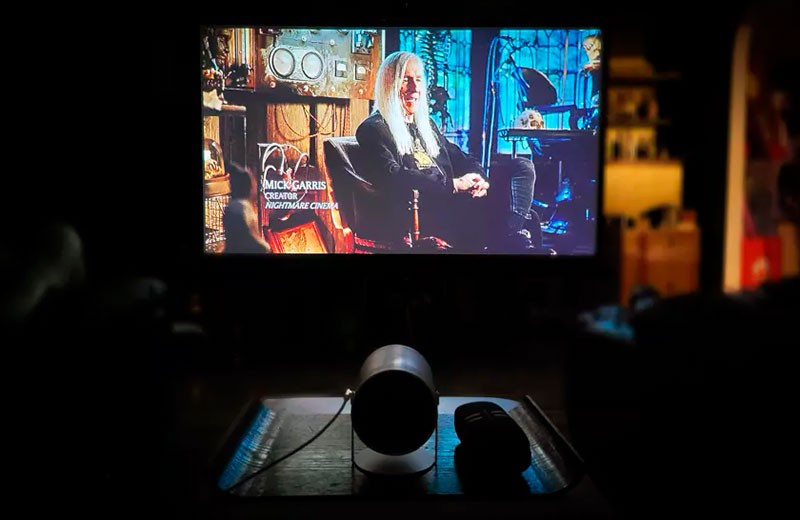 It is worth adding that the OSD menu has many options related to setting the picture, sound, connections and power saving. Everything is arranged here so that everything is easy to use. 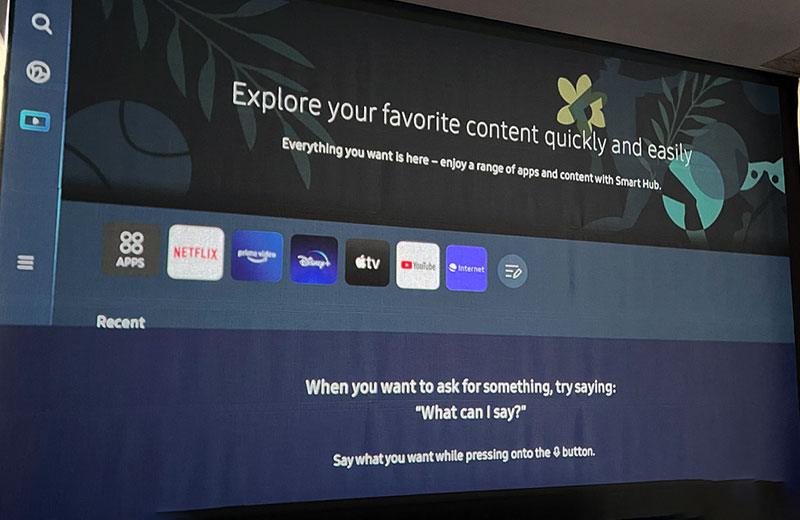 The remote, included with The Freestyle, is a small device, not intimidating by the excess of buttons. We have only the most essential ones, as well as quick launch keys for apps like the web browser, as well as Netflix VOD, Disney+, and Amazon Prime Video. The remote is powered by a built-in battery that charges through the USB-C port. 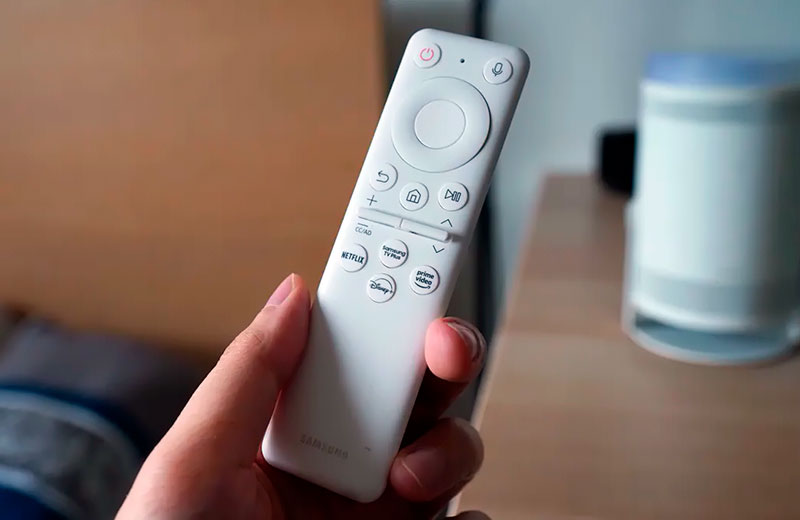 Samsung The Freestyle Remote
The Samsung Freestyle can also act as a lamp, which comes in handy with Ambient mode and a translucent lens cover. Thanks to them, the light from the lens will scatter immediately. The power of the lamp is not very high, so the solution is not very suitable to be a full-fledged light source in the room.

Samsung The Freestyle as a lamp 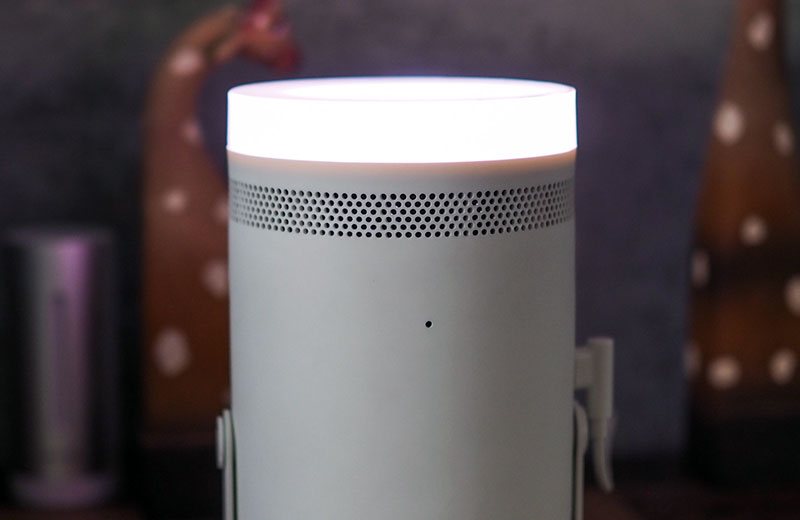 In this way, we can use, for example, the screensavers of the Spotify app, which change depending on the album cover from which the tune that we are listening to is playing.

Samsung The Freestyle as a smart speaker 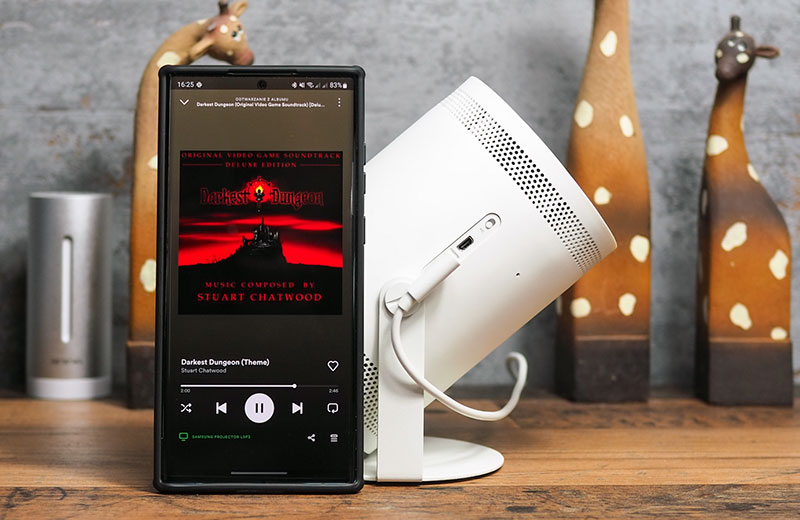 Interaction with the Smart Home.

An important question for me is whether Samsung The Freestyle works with the Home Assistant-based smart home system I use.

Features of Samsung The Freestyle 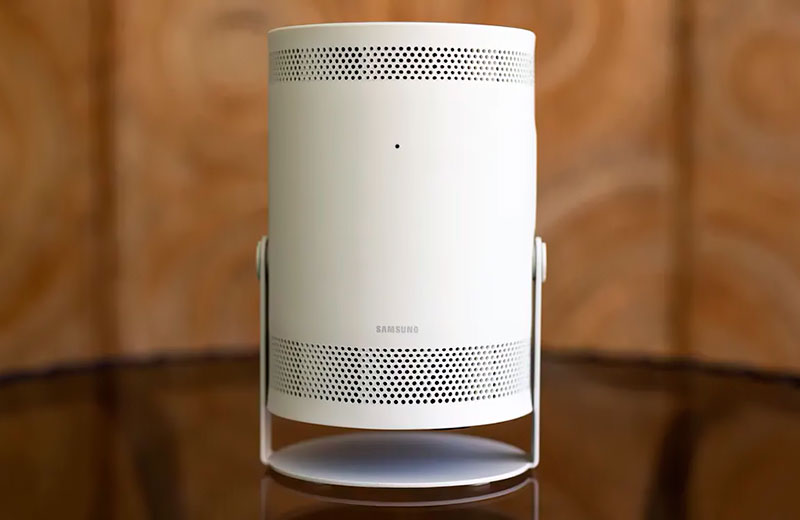 I got the answer very quickly – it is enough to connect the projector to my home Wi-Fi network for Home Assistant to notify me about the new device. The new integration allows you to create almost any scenario using the device under test. 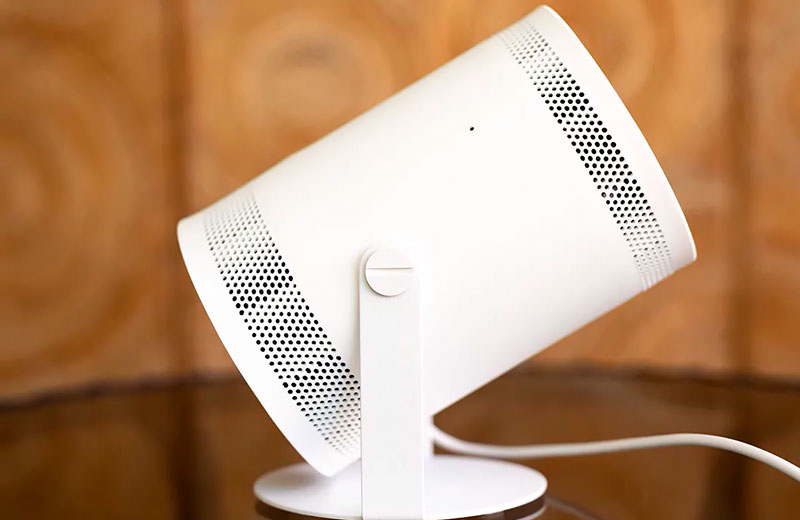 Freestyle can remotely turn on and, for example, close blinds at the same time during the day, or dim the lights in a room. DLNA support means that the projector’s content source can be any other device on the same network with DLNA technology.

Samsung The Freestyle in practiceSound quality The Samsung The Freestyle is equipped with a single 5W speaker whose sound spreads 360˚ when placed in an upright position.

The sound of the Samsung The Freestyle.

So we get a good bass (deep, though, you can forget about it), but the rest of the tones will be slightly muted. Better sound quality, but weaker bass is obtained if you tilt the projector. The Freestyle sounds good considering the 5W power and small size. The speaker in the Samsung The Freestyle.
The maximum volume, at 60 cm from the source, reached 94 dB, at very high tones. The average value did not exceed 90 dB.

At the same distance, about 60 cm from the projector, I measured the operating volume, it was about 40 dB. But, this noise will not be heard at a greater distance and if there are other sounds, such as from watching a movie. 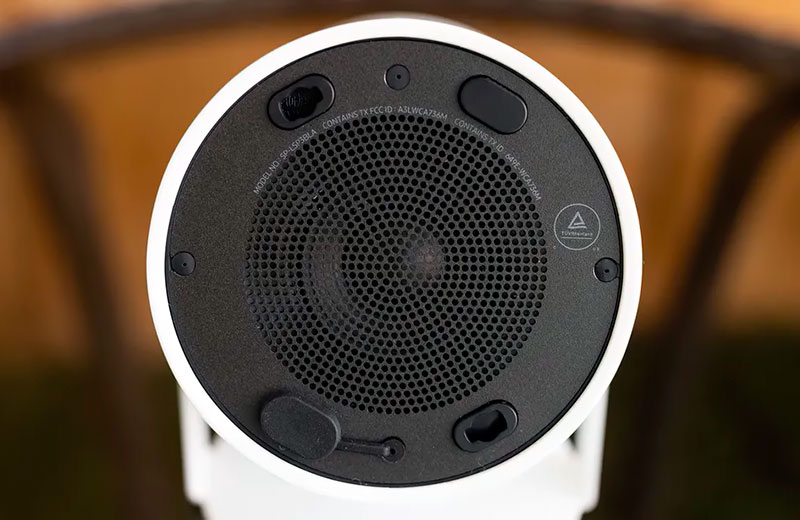 A key aspect of any projector is the quality of the projected image. Samsung The Freestyle projection
In the case of the Samsung The Freestyle, we’re dealing with equipment that does quite well. If you adjust the geometry and sharpness correctly (automatically or manually), you can count on a nice, color-saturated picture with high contrast.

The image can also be adjusted to personal preference within a fairly wide range. Appropriate options are available in the OSD menu. 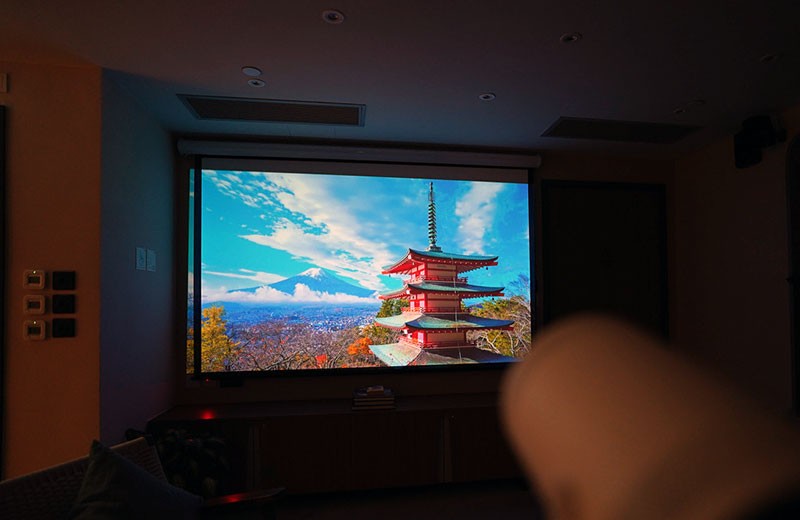 First, the relatively low resolution by today’s standards. The small Samsung projector outputs an image at a maximum resolution of 1080p. Of course, it can handle 4K files as well, but they are projected on the screen in FullHD.
Second, relatively low projection brightness. It is enough in a dark or shaded room, but in brightly lit rooms or outdoors during the day, the comfort of viewing something will be low. 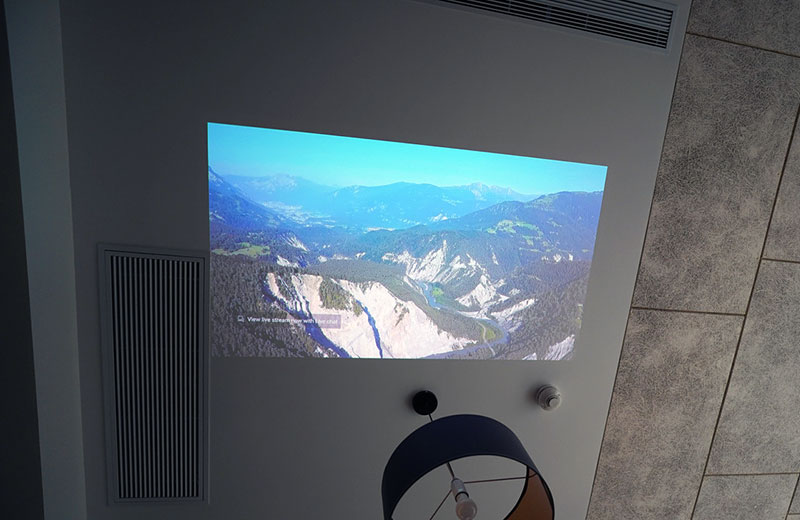 Samsung The Freestyle projection on the ceiling

The Freestyle is powered by the included 65W AC adapter connected via the USB-C port.

Being far from an outlet, we can also power the device from an external battery as well. However, there are restrictions, which even a lot of good poverbanks do not meet – the power of at least 50 watts and a voltage of 20 V.

This is also due to the fact that Samsung plans to provide a special battery pack for a fee, which will increase the mobility of the Freestyle projector. Samsung The Freestyle is a small and unassuming device for multimedia, which has quite a lot of features.

As befits a mobile projector, the Freestyle is small and handy, and the built-in features are similar to those offered by the Korean manufacturer’s new TVs. First and foremost are the useful features of Smart TV.

The tested device can serve not only as a projector, but also as a stylish lamp or a smart speaker. As for the main purpose, you can count on good picture quality with a few reservations. The built-in 5W speaker also does a pretty good job. 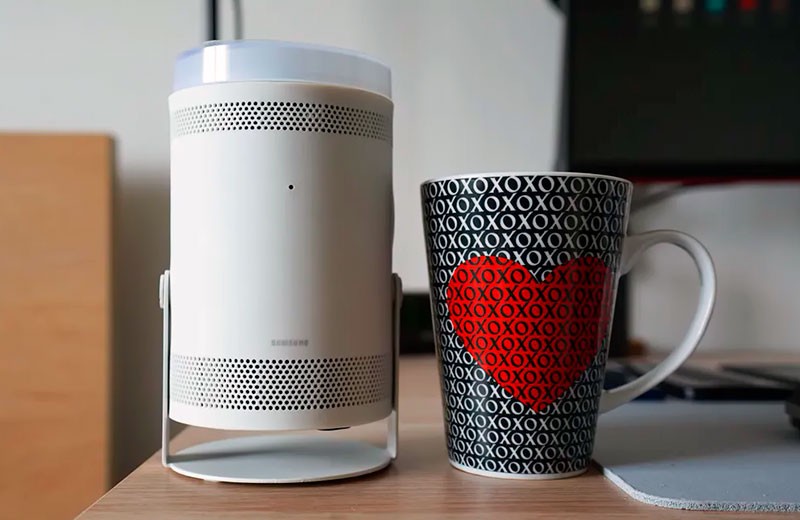