Samsung The Serif belongs to the so-called designer televisions from the company – in contrast to the modern trend, when the latest models from all manufacturers look almost the same and differ mostly only in design legs, the Serif series (as well as other Samsung ranges, such as The Frame and The Sero) is unusual and interesting design, allowing it fits perfectly into modern interiors.

The look of The Serif TVs was developed by the French design duo, the Bouroullec brothers. Their studio specializes primarily in furniture design, and The Serif also looks more like an interior object than a consumer electronics. 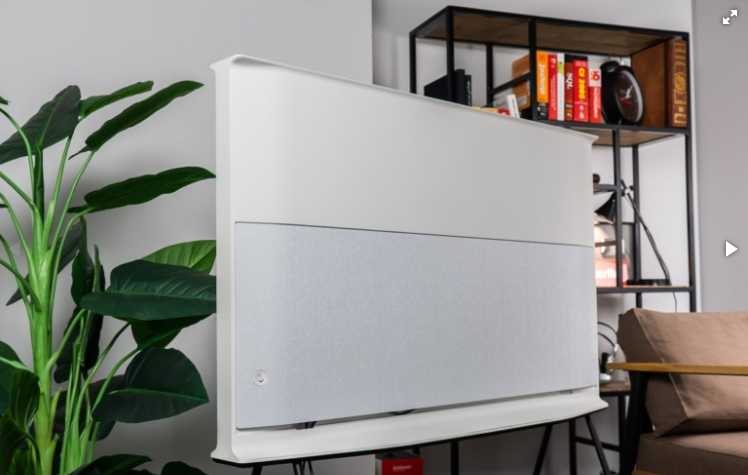 In contrast to typical modern televisions, where they try to make the frame as thin and inconspicuous as possible, so that the whole TV turns into a “screen on legs”, with The Serif the frame is, you might say, a key design element. It is the thing that draws the eye right away and that you pay attention to in the first place. It is wide and relief and in profile reminds the Latin letter I with serifs (the name of the ruler seems to come from here). In addition, the smooth lines and lack of straight angles and sharp edges are something reminiscent of organic object design in the style of Zaha Hadid. 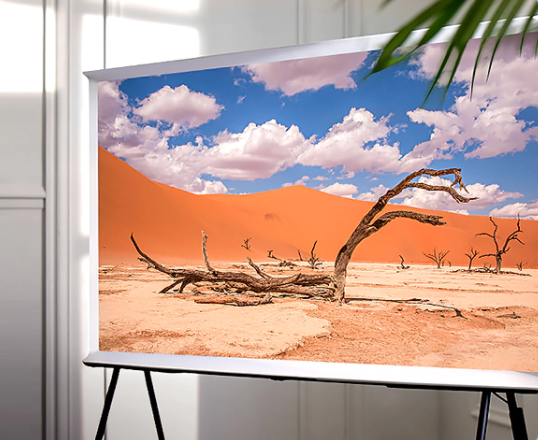 The frame is made of white matte plastic. The 2020 model is available in three sizes – 43, 49 and 55 inches, and we had a chance to see the latter. The Serif can be installed both on a TV stand and on the floor – for the second option, additional legs are designed (along one of them you can lay cables so they do not spoil the appearance). 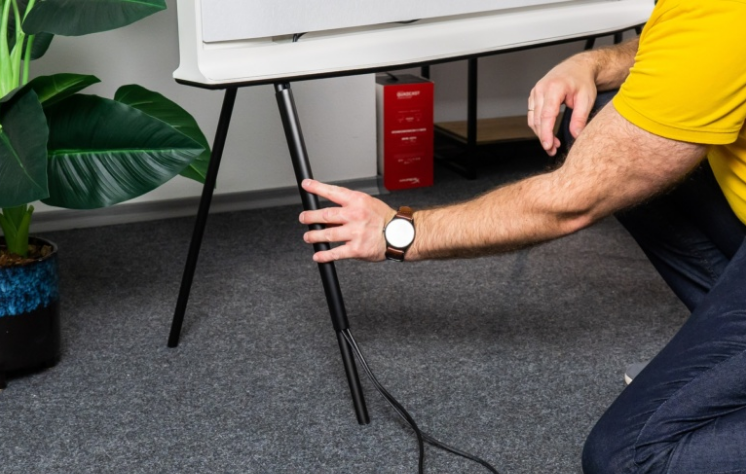 The legs are long and quite thin, but the TV stands on them very steadily and securely. The top of the frame is flat and relatively wide (a little over 10 cm), so it plays the role of a kind of shelf on which you can place some small items like photo frames, etc. 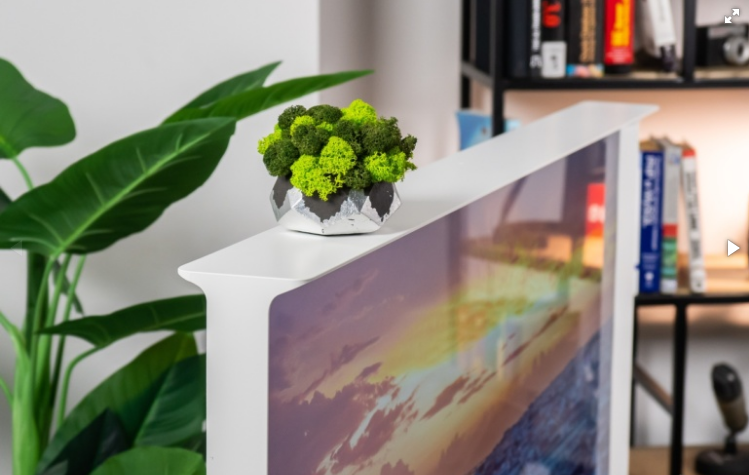 To access the connectors it is necessary to remove the decorative panel that covers the entire bottom half of the back of the TV. The connector block is on the left side of the housing, here the user can connect two antennas (one for terrestrial or cable TV and another one for satellite TV). There are also four HDMI inputs, a digital audio output, and two USB ports (one of which can power an external HDD). The conditional access module is installed through a special adapter included in the package. The TV set is connected to the home network via Wi-Fi – there is no wired connection. 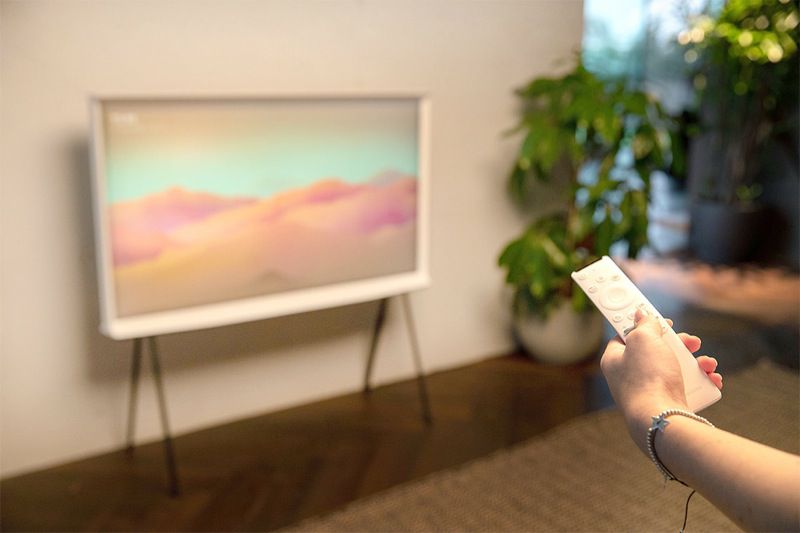 The TV comes with a “smart” remote control – Samsung One Remote. It is very small, ergonomically shaped, with a minimal set of buttons. The main buttons (Home, Play, Back) are located directly under the thumb, the volume control and channel switching are performed using thin “swings” that respond to up and down. The remote control is not gyroscopic, so you can not control sweeps of the hand, but it has a voice control. 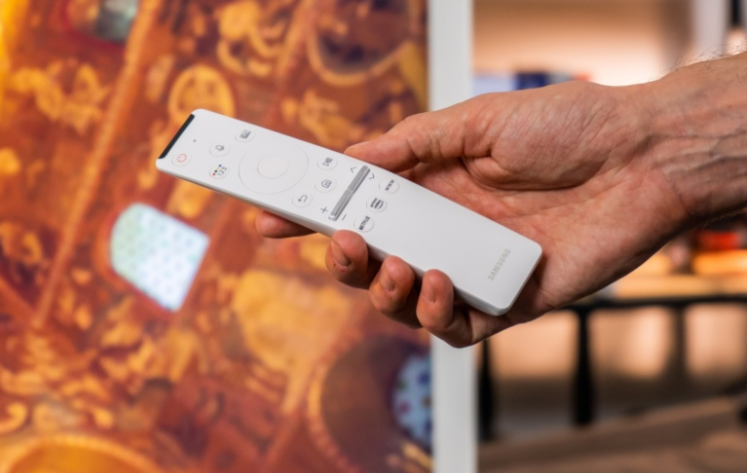 As a smart shell here is used its own Smart platform based on the Tizen OS, which is characterized by a simple and easy to use interface. The main way it is presented is a ribbon menu at the bottom of the screen, on top of the current content. If you select any item in the main bottom ribbon, its submenu opens at the top – the list of movies and series in Netflix, the recommended videos in Youtube, the main settings in “Settings”, etc. Additional applications can be installed in the Apps section, and the user can also edit the content of the feed to his liking. 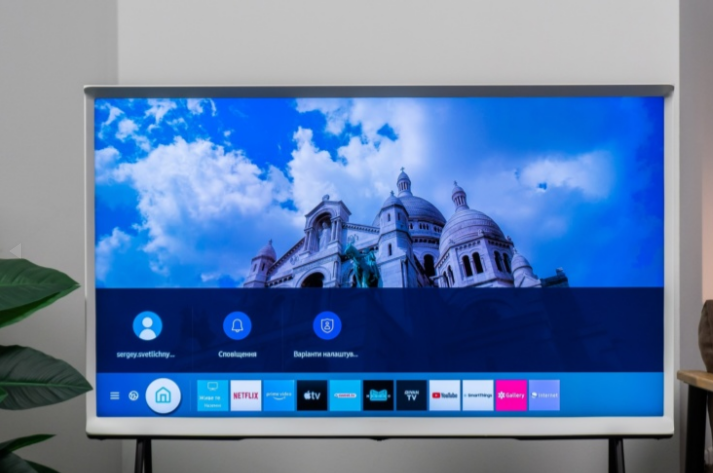 As interesting as the frame around the screen is from a design point of view, when the TV is off, it turns into a huge black rectangle – so Ambient mode is very appropriate. It allows you to display a kind of screen saver during inactivity – static “wallpaper”, dynamic “screensavers”, your personal photos, etc. You can also use the SmartThings app to set a photo of your wall as a screensaver and make your TV “translucent”. In addition, unlike other Samsung models, The Serif has an exclusive category of screensavers from various design studios. 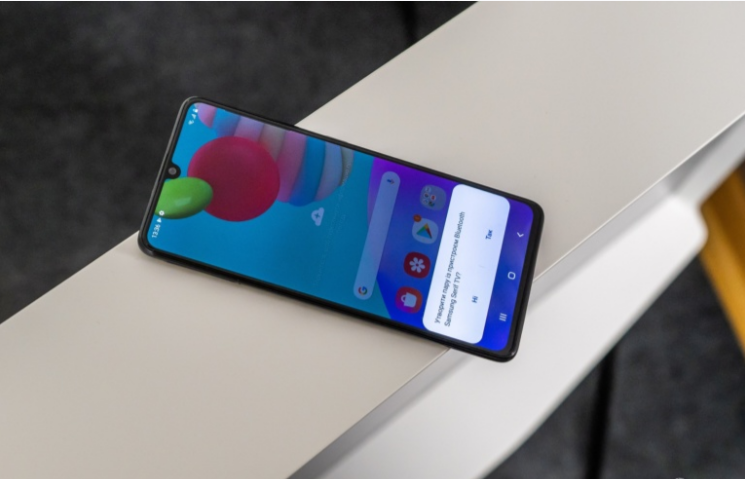 The built-in media player can play back media content from your local network as well as from USB attached storage devices. It supports 4K resolution, H265 format, HDR video, allows you to switch audio tracks and text subtitles. The system performance is enough for the player to play without the slightest lags the “heaviest” videos we had in our collection (~160 Mbps).

When connecting to a computer or game console, you can activate the game mode – in it the image optimizers are turned off, due to which the response time is reduced and the “responsiveness” in video games is increased. And if you’re going to use the PC connection to watch movies, it’s better to switch the device type from “PC” to “Blu-ray player” – because the former will only have a choice of two picture modes (Standard and Dynamic), while the latter adds two more (Natural and Film), plus intelligent image processing becomes available.

A stereo system consisting of four 10 watt speakers each is responsible for the sound. The sound is loud and of sufficient quality: it has well developed high frequencies and quite good middle frequencies. Full-fledged bass, of course, is absent, as well as any built-in audio without dedicated low-frequency speaker – so fans of quality music or entertaining action movies should think about buying a soundbar or a full-fledged surround sound kit.

Samsung The Serif (QE55LS01) uses a 55-inch panel with 4K resolution and a quantum dot screen – Quantum Dot. QLED screen means that instead of traditional light filters, it uses a thin film with quantum dots (tiny semiconductors that glow under the influence of low-radiation LEDs) applied to it. This allows for greater color gamut and higher contrast.

Thanks to the use of SVA-panel black color in the TV is really black without a barely noticeable “gray layer”, and the static contrast is at 6000:1 – a very decent figure. 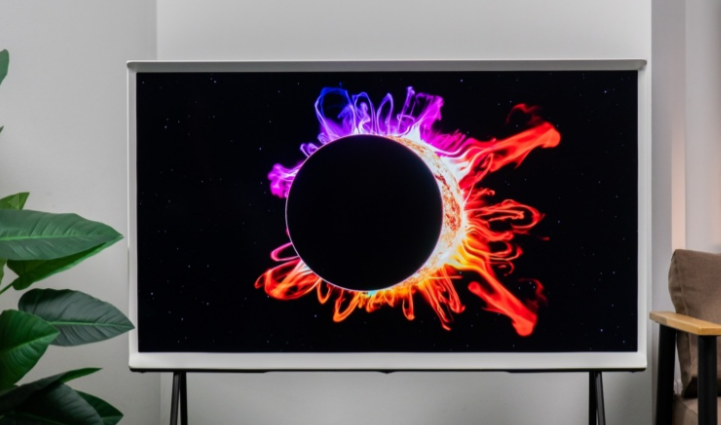 Video modes “Dynamic” and “Standard” offer a rich, bright picture, suitable for demonstrating the capabilities of QLED, while “Natural” produces a calmer image with a more accurate contrast. In all three modes, the TV shows 100% coverage of the DCI-P3 color space. 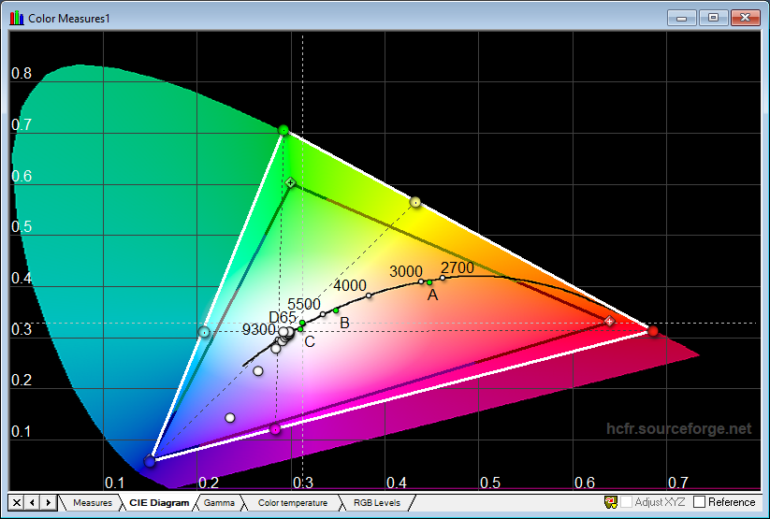 The “Film” mode is optimal for watching movies: it gives a balanced picture with accurate color reproduction and natural colors, with good elaboration of details both in the shadows and in the bright areas of the frame. The color gamut is narrowed from full to sRGB space. The brightness of the screen is slightly reduced, which will be more appropriate in a room with dim light, and the color temperature becomes warmer, which makes prolonged viewing more comfortable. 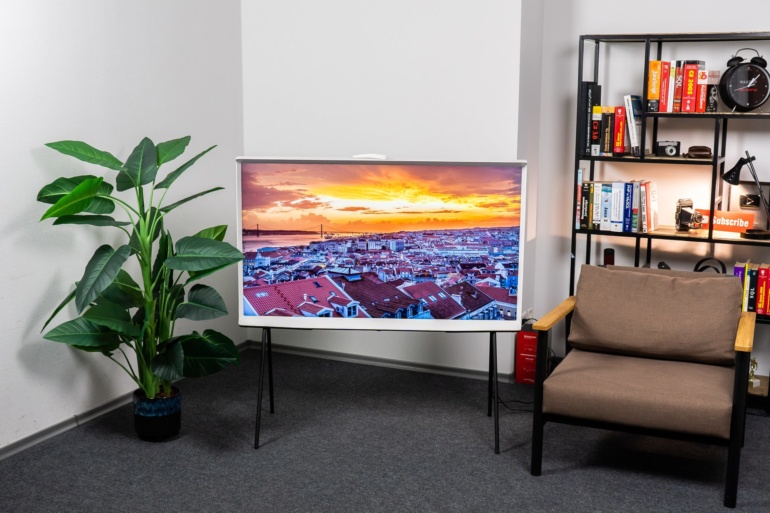 The TV has support for extended dynamic range in three standards: HDR10, HDR10+ and HLG. As with standard video content, you can use one of four picture modes here. We would recommend turning on “Dynamic” if you want to impress your guests – it shows the brightest and most saturated picture with literally screaming colors, but the original image is visibly distorted, mainly due to “stretching” shadows, which can lead to a loss of scene depth. In “Standard”, this effect is a little weaker, but it’s also noticeable. We would recommend “Natural” mode for a more natural display of HDR content – in this mode HDR is well felt, but the picture does not turn the TV into a “demonstration board” of the QLED panel capabilities. And finally, the “Film” mode produces the most natural and authentic image, as in the case of SDR content, but the HDR effect is felt the weakest in it. 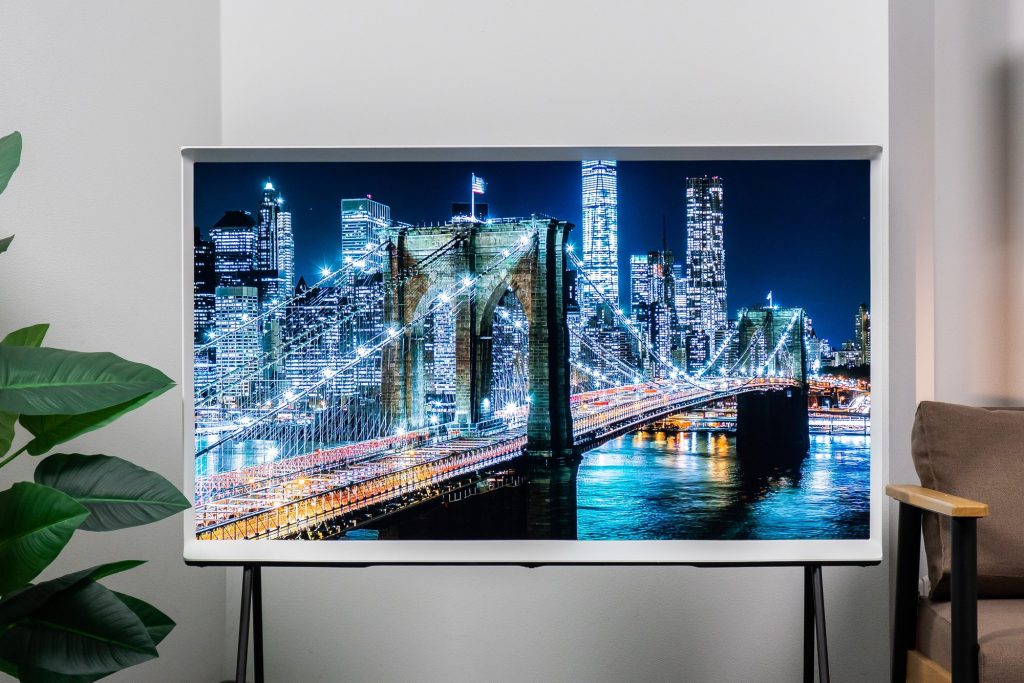 No particular disadvantages revealed
Conclusion: Samsung The Serif is radically different from other televisions and proves that such a device can not be just a “black rectangle”, but on the contrary, organically fit into the interior of the apartment. At the same time, it also demonstrates excellent picture quality thanks to the QLED panel – with deep blacks, vivid saturated colors and spectacular HDR mode.