This summer, Samsung began selling in US The Sero TV with a rotating screen that allows you to watch content in horizontal and vertical formats. Studying the device, we tried to understand who exactly could be interested in such an unusual novelty.
Package Contents and Design Features
The TV comes in a huge box. Inside, along with the device itself you will find a slightly less than 3 meters long power cable (the power supply is built into the TV), a remote control, a Common Interface adapter for connection of the conditional access module and the user manual.

The unusual TV body consists of two parts – a screen and a vertical base. The screen is attached to the base with a motorized drive. The base is held by a stand, which is inserted into a special slot in the back. The bottom of the base and the stand have rubberized feet – they prevent slipping. The design is heavy (33.3 kg) and generally sturdy, you will not drop it accidentally. In order not to damage the TV, we advise to assemble it according to the instructions. Please note that because of its design and weight, the TV is not designed to be mounted on a pedestal or mounted on the wall – its place is on the floor.

The outside of the base and screen are made of matte plastic. There are four speakers in the front at the bottom of the base under the synthetic cover, and another one at the back of the base that is responsible for low-frequency playback.

By default, the screen is upright when you turn it on. You can switch it to the usual horizontal position by pressing a separate button on the remote control. From the settings menu it is easy to select the screen position (vertical/horizontal), which the TV will keep when turning off. 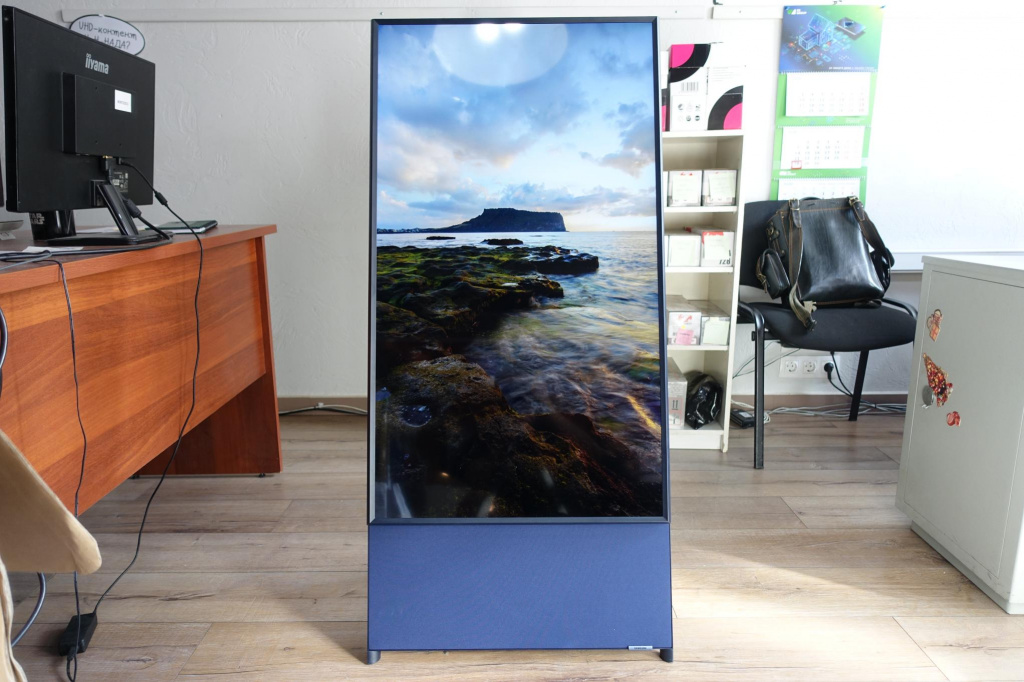 In the corner of the top of the base is the power button. It’s multifunctional: you can turn the TV on/off, switch TV channels, adjust the volume, select a content source, and change the screen orientation. It is possible to move between menu sections with a single press, and to select menu items with a longer press, about 2 seconds.

The only means of indication on the TV body is the LED installed on the bottom of the base, behind the manufacturer’s logo.

All the wired interfaces are located at the bottom of the back of the base. To get to them you have to detach the decorative plastic strip each time. There are cable/air and satellite TV inputs, three HDMI ports (one with eARC support), and a pair of USB 2.0 ports (one 0.5 A, the other 1 A). There is no composite input. The distance between the HDMI interfaces is sufficient. But you shouldn’t connect flash drives in a non-standard case – the distance between the USB ports is not big. 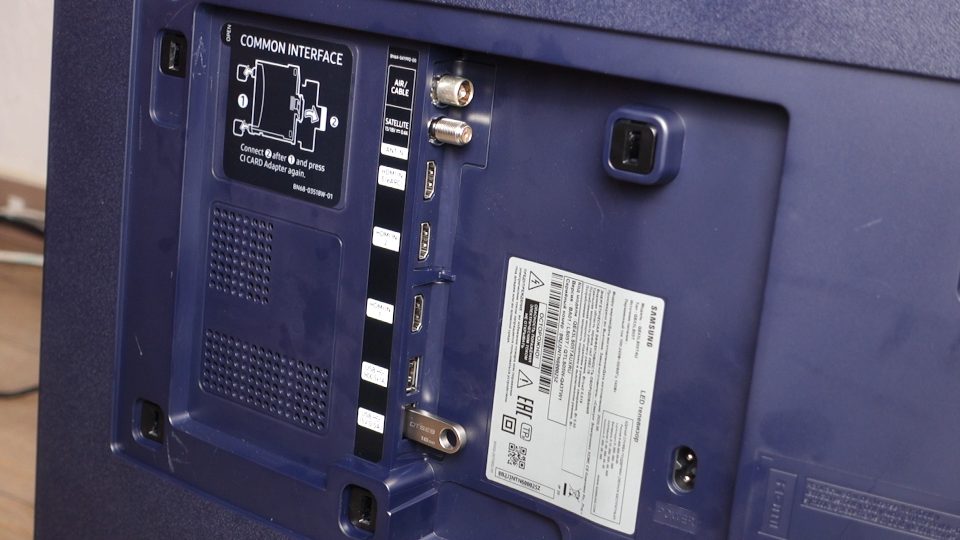 All interfaces are behind the removable plate. The “lazy bar” is familiar from Samsung’s modern smart TVs. For example, it comes with The Frame series TVs. The remote works via Bluetooth, which means there is no need to aim it at the TV. In our case, the signal was received without problems at a distance of about 7 meters. The distance between the buttons is enough to avoid double pressing. The remote control is not the lightest (98 g), but in general it is convenient. The keys for volume control and channel switching, in my opinion, are a bit stiff. A variant with the rocker keys would be better. The “lazybones” are powered by a pair of AA batteries.

The remote control is not the lightest (98 gr), but it is convenient in general.

The manufacturer does not disclose the information about the processor the TV set is running on and the amount of memory it uses. It is only known that the Quantum Processor 4K chip is responsible for image processing. The traditional Samsung smart TV operating system Tizen is used. Bluetooth 4.2 and Wi-Fi 5 (with the ability to work in the 2.4 and 5 GHz bands) are built in. Wi-Fi Direct technology is implemented. There is no local network port. Apparently, this is a deliberate decision by the developer, who is positioning the TV as a device primarily for playing content from mobile devices. 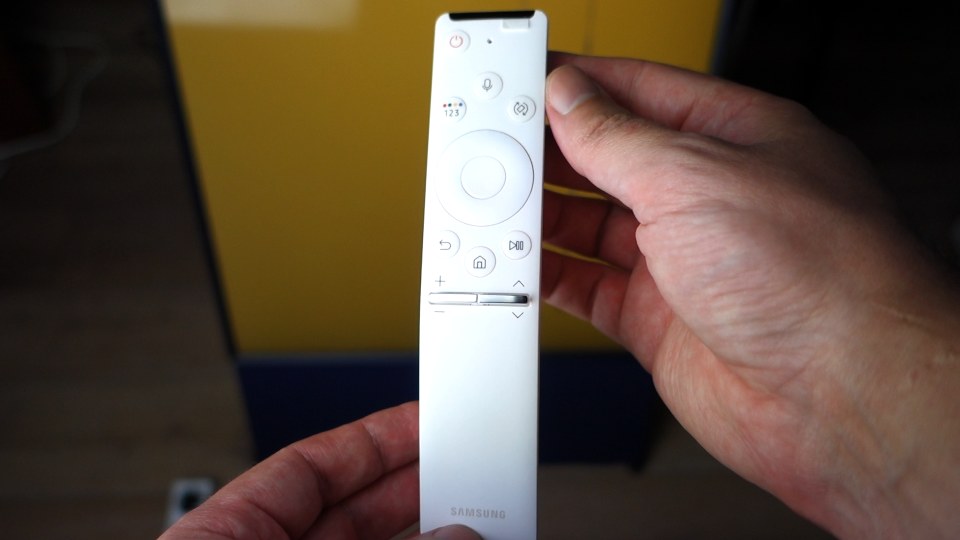 The screen at 43 inches diagonal provides a resolution of 3840×2160 pixels. There are no other diagonal options. The matrix is created using QLED technology. Support for Quantum HDR, HDR10, HDR10+ and HLG extended dynamic range technologies is announced.

Features of menus and modes

The settings menu consists of “Picture”, “Sound”, “Broadcast”, “General”, “Support”, “Terms of Use and Privacy Policy”. The content of these sections is probably not worth a detailed description – it is clear from the name. Most likely, you will need this menu once – the first time you turn the TV on and set it up.

I will focus on the book mode (Ambient Mode) and the portrait mode (Portrait Mode). In essence, they are a digital photo frame function and require an internet connection to work properly. At the first case, in the horizontal position the TV shows a variety of static or dynamic pictures, including with the sound. In this case in the upper left corner the time, date and weather for the current location are shown (using the data of The Weather Channel). It is possible to change the background of the picture, adjust the red, green and blue colors separately, brightness, saturation, hue, etc. In short, there are a lot of possibilities for personalization.

In the second case (Portrait Mode), everything is similar: in the vertical position, static or animated pictures are displayed on the screen – the latter with sound. There are the following themes: “Clock”, “Poster”, “My Photos”, “Cinemagraph”, “Sound Wall”. Unfortunately, the user does not have the ability to upload his own photo to be shown in Ambient and Portrait modes and set it to play the selected tune.

It takes 2 seconds to turn on the TV. The screen rotates 90 degrees in 4 seconds. Actuator is almost silent. Menu responds to remote commands without delay. The interface is responsive and does not slow down.

We checked the operation of the device in several scenarios. The first one is playing content in video applications. As there is no local network port, we used two bands of Wi-Fi (2.4 and 5 GHz) to access the Internet, and also connected to an access point, which was a tablet running Android 9. Content on YouTube and video services with a stable wireless connection was played without problems, including in ultra-high definition format.

The second scenario is the work in wireless projection mode, when the mobile device screen is transmitted directly to the TV screen, bypassing the Wi-Fi router. There are no particular problems here either. In this mode, there is a certain delay between the command on the mobile gadget and the reaction on the TV screen. This is a peculiarity of the technology. Depending on the device from which the projection is made, the TV screen can fill the picture completely or with small frames. Frames, in particular, were present when projecting from devices with a screen that has a different aspect ratio than the TV. If you have a Samsung Galaxy smartphone, it is easy to remove the frames by changing the aspect ratio in SmartViewer.

Depending on the device from which the projection is made, the TV screen can fill the picture completely or with small frames

The third scenario is watching the content from an external drive. Our TV succeeded in playing common formats of audio and video, but failed to cope with video files with WEBM extension of 4320p. However, let us be fair: 8K content is still a rarity, and there is no real need for it. But the fact that the TV set was unable to play back 2160p video with HEVC codec and high bitrate (245 Mbps) is a minus. After all, relatively inexpensive Android-based set-top boxes (based on Amlogic chipset) can cope with playing such files. Of course, it is not quite correct to directly compare a set-top box and a smart TV, nevertheless it is a pity that a TV of this class did not have enough power for such a task. By the way, the limitation may be on the side of the operating system.

We should also remind you about the absence of DTS support. The built-in player has a 360 degree mode, allowing you to watch video content in a panoramic format, rotating the picture, for which the remote control is used. Perhaps some people will like it.

You can use the remote control to navigate through the sites via the built-in browser, but it is more convenient to do it with a mouse, especially as it is supported and you can even adjust the pointer speed in the TV settings menu. When scrolling the web page sometimes sharply goes up or down, and it does not depend on the mouse.

The picture quality is very good. The stock of brightness is enough for any conditions. Please note that the screen is glossy. There is no lack of contrast. I am pleased with the accurate color reproduction and wide viewing angles. The only remark – uneven color on the sides of the screen when viewed from a certain angle. The relatively low input delay allows you to use the TV as a screen for a game console. A customizable game mode comes in handy here as well.

The speaker system has a claimed total output power of 60 watts, while the speaker power of most TVs in this price class usually does not exceed 40 watts. Clearly, this has been achieved by a stand of the right volume. The wattage of the woofer is higher than that of the other speakers – 20 watts against 10 watts. However, the well-distinguished bass might be both a plus and a minus – it all depends on what kind of video content you prefer to watch and what kind of music you like to listen to. For example, classical music sounds less expressive than rock. Subjectively, the sound quality can be estimated as above average.

Finally, let’s talk about the positioning of the TV. Samsung’s idea is that most mobile content is vertical, so The Sero is designed to encourage young people to stream content from their mobile device to their TV. The TV first went on sale in spring 2019 and was initially available in South Korea. In an official press release, Samsung acknowledged that The Sero was something between a concept and an actual product and promised to closely examine feedback from consumers. In US, sales of the TV began a year later, in the summer of 2020.

The ability to use the screen in horizontal and vertical formats is certainly an interesting feature, but the idea of such a TV, geared specifically for the display of vertical content, and the smartphone as the main source of such content is debatable. The fact is that it is inconvenient to constantly sit in front of the TV with a smartphone in hand: you need to regularly look at the screen of the mobile device in order to control it, and the need to periodically charge the gadget restricts freedom of movement. There is actually not much vertical content on the Web – all films and serials are still filmed in the usual horizontal format. The same can be said about games.

In my opinion, The Sero is worth paying attention first of all to those users who need a stylish and unusual 4K TV with high-quality picture and good sound, and who know exactly what they want from such a device. Other Lifestyle TVs